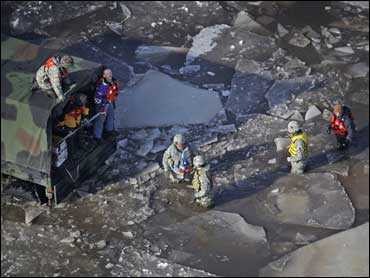 The bloated Red River briefly breached a dike early Sunday, pouring water into a school campus in the Midwestern U.S. city of Fargo.

The mayor called it a "wakeup call" for a city that needs to be vigilant for weaknesses in levees that could give way at any time.

Crews managed to largely contain the flooding to the campus of Oak Grove Lutheran School, preventing more widespread damage in nearby areas.

"The campus is basically devastated. They fought the good fight. They lost and there's nothing wrong with that," Mayor Dennis Walaker said. "Those things will continue to happen. I guarantee it."

Oak Grove Lutheran Principal Morgan Forness said city crews, the Army Corps of Engineers, and the National Guard unsuccessfully tried to contain the rushing water to one building after a permanent flood wall panel at the school buckled around 1:30 a.m.

But the water kept spreading and "we couldn't contain it. ... it's inundating all of the buildings," Forness said.

The city had been bracing for a crest of up to 43 feet on Sunday, but instead the National Weather Service said Saturday that the river had crested at 12:15 a.m. Saturday at 40.82 feet.

By early Sunday, the Red River had dropped to 40.15 feet, still more than 22 feet above flood stage. The river may fluctuate up to a foot and remain at dangerous levels for a week, meaning an agonizing several days before people can relax.

"What happened up in Oak Grove this morning was a wakeup call," the mayor warned at a morning briefing.

The city requested more volunteers to resume sandbagging Sunday. Many were expected to turn out after church services in the heavily Lutheran city of more than 90,000 residents. The mayor began his briefing Sunday morning with a prayer.

To prevent additional dike breaches, officials planned to begin dropping one-ton sandbags from helicopters Sunday to deflect the violent current of the Red River and keep it from eroding vulnerable sections of the levees.

The aerial effort also includes Air Force Predator drones used for watching water patterns from the air and helping teams respond on the ground. It's the first time the drones have been used in a flood-fighting effort.

Water already has forced hundreds of residents in the Fargo area from their homes and submerged basements and yards in an untold number of houses along the river. Emergency crews using boats had to rescue about 150 people from their homes in neighboring communities in Minnesota, where about 20 percent of households in Moorhead had been urged to leave.

"I just hope that everybody doesn't let up. We can't let our guard down," said Al Erickson, a 47-year-old banker whose two-story home is across the street from a golf course that is now a giant water hazard. "The city as a whole will be OK, but there may be neighborhoods that still may have some trouble."

National Weather Service forecasters say the river is retreating because cold weather - just 17 degrees Fahrenheit at 7 a.m. Sunday - has been freezing water that normally would be flowing into the river. By the time that water melts, the biggest flooding threat should have passed, Hudson said.

Volunteers were asked to inspect the levees for problems, joining National Guard inspection teams on the more than 35 miles of levees around Fargo.

"I don't think there's an inch of riverfront on the Fargo side that doesn't have some kind of levee," said city engineer Mark Bittner. "We encourage neighborhoods to get together and have their own dike patrols and assist us."

Bruce Boelter walked the entire length of a roughly mile-long stretch of sandbag dike to eyeball the manmade wall separating his subdivision and the Red River. Neighbor Tony Guck joined him halfway. Each felt a special stake in the dike they helped build.
"If we don't protect this, it's gonna get us. It's basically for our own security," said Guck, 42. "I'm just planning on coming out every six hours and walking it."

Water has forced hundreds of residents in the Fargo area from their homes and submerged basements and yards in an untold number of houses along the river. Emergency crews in boats had to rescue about 150 people from their homes in neighboring communities in Minnesota, while about 20 percent of households in Moorhead have been urged to leave.

The flooding was brought on by heavier-than-average winter snows, spring rains and a rapid thaw of the snowpack that sent the Red River to record-high levels in Fargo, North Dakota's largest city.

A winter storm was predicted to hit North Dakota early next week, although the snow isn't expected to affect the flooding in Fargo. Still, wind from the storm could cause 2-foot waves that could send some water over the top of dikes, said Dave Kellenbenz, a meteorologist with the National Weather Service.

"That's something we're going to have to watch closely as we move into next week," he said.

The variation in flood forecasts was a roller coaster throughout the week for Fargo, with the projection edging upward twice before being lowered Saturday. Fargo Mayor Dennis Walaker opened a briefing earlier in the day by apologizing for criticizing the weather service.

Greg Gust, a warning coordination meteorologist for the weather service, said the predictions are complex. They come from round-the-clock work by hundreds of scientists, engineers and other experts. Some of those people brave the river for measurements of volume, flow and temperatures. They also use computer models for mathematical and statistical analyses.

But even with improved forecasting methods, the river's record levels and the volatile temperatures don't allow anyone to be certain, and the weather service continued to hedge its prediction Saturday.

The main focus for the Fargo area will be on whether the long line of levees will be able to hold up against the floodwaters - regardless of their level. Engineers say that anytime water is pressed up against a levee for a considerable period of time, there is a risk of catastrophic flooding.

"The saturation usually becomes the enemy of a levee over time," Jud Kneuvean, chief of emergency management for the U.S. Army Corps of Engineers in Kansas City. "It can cause the embankment to be less stable and slide."

Word of the river's possible retreat couldn't come at a better time for 91-year-old Jim Sundahl, whose Moorhead yard has already been swallowed up by floodwaters. He has been waging a furious battle to keep the waters from his home, where he was born.

"I'm happy about it, I'll tell you that," Sundahl said. "But it won't do us any good for four or five days."