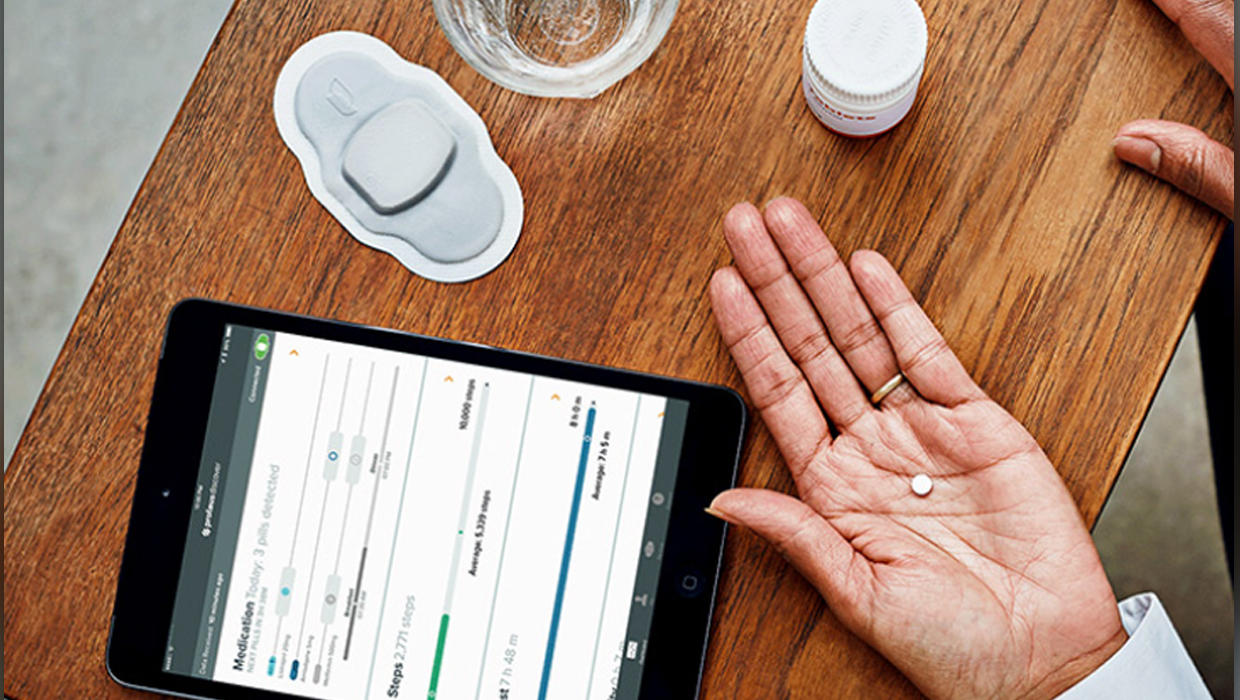 WASHINGTON -- In a first, the Food and Drug Administration has approved a so-called digital pill that contains a sensor that lets the doctor know when it's been taken.

The technology is intended to help prevent dangerous emergencies that can occur when patients skip their medication, such as manic episodes experienced by those suffering from bipolar disorder.

The drug will come with a boxed warning that says it is not intended for use in elderly patients with dementia-related psychosis; it increases their risk of death. It also has not been been proven safe or effective for children.

CBS News chief medical correspondent Dr. Jon LaPook explains how the digital pill, Abilify MyCite, works. It's a tiny chiplet -- about the size of a grain of sand -- that is combined with the medication and swallowed. It hits the stomach and a signal is beamed to a patch on the person's skin. The patch then sends a signal to your iPhone saying the medication has been taken.

"There's a big problem, which is that about 50 percent of people don't take medicine the way they are supposed to, so hopefully this could give the patient the ability to get a reminder," LaPook said. "Also, send a signal, if they want, to the doctor, if the patient chooses."

A patient will have to agree to the digital pill, so it wouldn't be forced on anyone, LaPook said. There's "no doubt" it could have implications for other diseases, LaPook said.

But developers Otsuka Pharmaceutical Co. and Proteus Digital Health are likely to face hurdles. The pill has not yet been shown to actually improve patients' medication compliance, a feature insurers are likely to insist on before paying for the pill. Additionally, patients must be willing to allow their doctors and caregivers to access the digital information.

Although the digital pill has raised some privacy concerns, LaPook said there are the same issues as having electronic medical records in a big hospital.

Experts say the technology could be a useful tool, but it will also change how doctors relate to their patients as they're able to see whether they are following instructions.

"It's truth serum time," said Arthur Caplan, a medical ethicist at NYU's Langone Medical Center. "Is the doctor going to start yelling at me? Am I going to get a big accusatory speech? How will that interaction be handled?"

The technology carries risks for patient privacy, too, if there are breaches of medical data or unauthorized use as a surveillance tool, said James Giordano, a professor of neurology at Georgetown University Medical Center.

"Could this type of device be used for real-time surveillance? The answer is of course it could," said Giordano.

The FDA stressed however that there are limitations to monitoring patients.

"Abilify MyCite should not be used to track drug ingestion in 'real-time' or during an emergency," the statement said, "because detection may be delayed or may not occur."

Patients can track their dosage on their smartphone and allow their doctors, family or caregivers to access the information through a website.

In a statement issued last May at the time the FDA accepted submission of the product for review, the companies said "with the patient's consent, this information could be shared with their health care professional team and selected family and friends, with the goal of allowing physicians to be more informed in making treatment decisions that are specific to the patient's needs."

While it's the first time the FDA has approved such a pill, various specialty pharmacies and hospitals in the U.S. have previously "packaged" various drugs and sensors. But the federal endorsement increases the likelihood that insurers will eventually pay for the technology.

Drugmakers frequently reformulate their drugs to extend their patent life and to justify raising prices. For instance, Otsuka already sells a long-acting injectable version of Abilify intended to last for one month. The patent on the original Abilify pill expired in 2015.

The Japanese drugmaker has not said how it will price the digital pill. Proteus Digital Health, based in Redwood City California, makes the sensor.