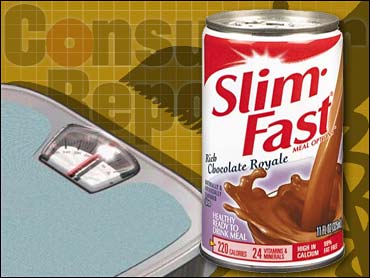 Meetings and shakes trump counting carbs when it comes to long-term weight loss, according to a recent analysis of diets by Consumer Reports magazine.

The publication, best known for rating cars and electronics, put Weight Watchers, with its support group meetings, and Slim-Fast, whose shakes let you opt out of cooking, at the top of the heap.

The ratings were based on pounds lost, nutrition, how easy the diet was to follow and dropout rates after six months and a year.

Though low-carb diets have dominated headlines, the highest marks went to Weight Watchers, which uses weekly meetings to reinforce its decidedly simple philosophy — eat less and exercise more. After a year, its followers were far more likely to stick with the plan.

Weight Watchers did not, however, earn the strongest scores on weight loss, a distinction that went to second-ranked Slim-Fast, which replaces parts of two meals a day with shakes and bars.

Atkins, which has led the low-carb charge, got good scores for short-term weight loss, but landed at the bottom of the ratings because of poor marks on retention and nutrition.

The report, released in the magazine's June issue, said the Atkins diet calls for too much fat and saturated fat, too few fruits, too little fiber and "might have a negative effect on some dieters' health."

The magazine's conclusions are based on a review of published clinical research on each diet, and a nutrient and calorie analysis of a week's worth of menus, including how closely they follow federal dietary guidelines.

Heimowitz took issue with the use of the federal guidelines as a way to evaluate the diets, saying those standards are intended for maintaining a healthy weight, not losing fat.

All of the diets reviewed are low enough in calories to produce results, but success relies on sticking to the plan, said Nancy Metcalf, a senior editor at Consumer Reports.

That accounts for the strong showing by Weight Watchers, which backs up a flexible, low-calorie, low-fat approach with weekly motivational meetings, Metcalf said.

"We are not necessarily the fastest kids in town, but we're livable and sustainable, and we feel that's very important," said Karen Miller-Kovach, chief scientist at Weight Watchers.

Slim-Fast, which sells its bars and beverages in grocery and drug stores, was praised for its ease and balanced nutrition. Its retention matched Weight Watchers' during the first six months, but then dropped considerably.

The high-protein "Zone" diet, from a book by Dr. Barry Sears, was the magazine's No. 3 program. Though its followers tended to drop out over time, the diet earned points for having considerably less fat than the Atkins approach.

The fourth-ranked ultra-low-fat, high-fiber vegetarian Ornish diet, from Dr. Dean Ornish, had the worst retention rate, though it had good long-term weight loss and was praised as a treatment for heart disease.

Thomas Wadden, a University of Pennsylvania weight loss expert, said the ratings seem sound, but noted the challenge of making comparisons when some diets involve structured meetings and others are do-it-yourself.

He added that the Atkins diet might have ranked better if weight loss was the only criterion. But Wadden said the magazine rightly considered the overall healthfulness of the diets' approaches.

Four other programs, Internet-based eDiets, Jenny Craig, South Beach and Volumetrics, were included in the review, but not ranked because not enough independent clinical studies had been done on them to allow comparison, the magazine said.