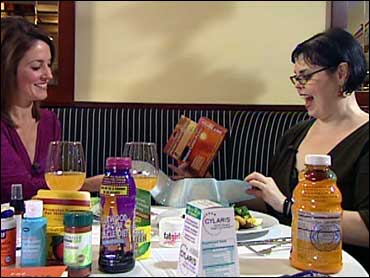 For decades, companies have been selling "slim" — and Americans have been eating it up. As CBS News correspondent Sharyn Alfonsi reports, Americans spend about $35 billion a year on weight-loss products.

"I estimate I spent, you know, tens of thousands — maybe $100,000 — on different kinds of diet products, diet services," says Wendy Shanker. "And I was still fat."

Shanker wrote a book about her adventures. She says she's tried all those diet fads and pills, and some made her crazy.

"First of all, your heart is beating, you're sweating," she says, explaining her experience with some pills. "You're like running around your house (saying), 'how come I never organized my tax returns from 1971?'"

She was organized, but still overweight. Dr. Louis Aronne says that's not surprising.

"They combine the worst of both worlds. There's no proof of effectiveness and no proof of safety. Why would you take something like this?" he says.

Aronne says the government is still treating weight loss like a cosmetic problem, not a serious health problem.

"These products need to be held to a standard that's closer to the standards that we use for medications that are used to treat serious health problems," he says.

But Americans are still willing to try anything — at any cost.

But her results aren't typical. Most dieters will try something else, which is why the diet business, unlike the rest of America, has never been in better shape.

Anne Heche's family: "We lost a bright light"
Thanks for reading CBS NEWS.
Create your free account or log in
for more features.
View CBS News In
CBS News App Open
Chrome Safari Continue
Be the first to know
Get browser notifications for breaking news, live events, and exclusive reporting.