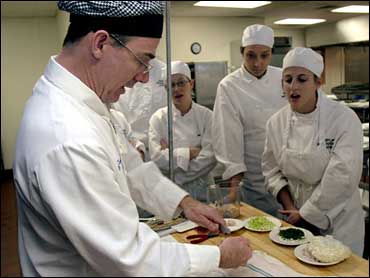 Tired of trying to keep track of all the so-called superfoods you're supposed to eat?

You know, oregano that packs 42 times more antioxidants than apples, cooked tomatoes that may prevent prostate cancer, and chocolate and wine that may or may not be health foods?

Then here's the good news — you can stop trying.

Leading researchers say all those breathless headlines, food packaging claims and seemingly contradictory studies about what antioxidants can and can't do have fostered a faulty silver bullet mind-set that can hinder health more than help.

Instead, experts advise focusing on balance, moderation and variety, and leaving the phytochemicals, flavanols and phenolic acids to scientists.

Researcher Jeffrey Blumberg acknowledges that "doesn't seem to be a very sexy message. People would rather be told there is a superfood, a term I hate because in fact there is no such thing."

Foods labeled as antioxidant-rich — everything from bottled tea to bags of frozen berries — have become a $526 million industry that continues to grow.

Even foods that otherwise have seen sales slump are getting a boost from antioxidant claims, says Phil Lempert, a food industry analyst and editor of SupermarketGuru.com. Sales of blueberry preserves, for example, are up, though overall jam sales are down.

"It's clear that regardless of whether or not people understand what 'rich in antioxidants' means, it is certainly a logo or a stamp that says 'Buy me! I'm going to help you live forever,"' Lempert says.

Maybe. Maybe not. Experts aren't suggesting antioxidants aren't important or that people shouldn't eat foods that contain them. Instead, they're saying not enough is known about how they work to justify focusing one's diet on any particular antioxidant or food.

It's all about quashing free radicals, harmful chemicals produced by the body and found in the environment that damage cells. That damage has been linked to a host of chronic conditions, from heart problems to cancer, even aging.

Diets rich in antioxidants — which are in countless foods — seem to minimize this damage. What's not clear is whether that benefit is due to the antioxidants themselves or to the overall diet and the way the antioxidants and other nutrients in it interact.

The evidence increasingly suggests the latter, says Howard Sesso, a professor of medicine at Brigham and Women's Hospital in Boston. That means eating patterns make a difference, but probably not eating particular foods or taking supplements.

Diets rich in beta carotene, for example, have been found to help prevent heart disease and cancer, but studies of beta carotene supplements alone have been mostly disappointing. And there is little evidence that one antioxidant is better than another.

Also unknown is whether quantity counts. Manufacturers brag about the amount of antioxidants in their products, but studies have yet to establish that more is better, or whether the body can even absorb the amounts contained in most foods.

Blumberg, a scientist at Tufts University's Friedman School of Nutrition, worries that the hype about antioxidants creates a false sense of security. Eating a daily handful of almonds — believed good for heart health — won't make up for a diet otherwise laden with saturated fat and cholesterol.

So how should people work antioxidants into their diets? Think big picture.

Healthy diets are like healthy investment portfolios — diversified, says John Erdman Jr., a professor of internal medicine at the University of Illinois at Urbana-Champaign. Eating a variety of produce and whole grains ensures the best mix of all nutrients.

There's probably not much harm in eating a lot of blueberries, but that can't be said of all antioxidant-rich foods. The calories in fruit juice and alcohol, for example, add up quickly and obesity negates the benefits of even the healthiest foods.

Even people trying to address specific health problems would do better to eat a broad mix of foods than to tailor their diets around certain ingredients, the experts say.

"When people get prostate cancer, all of the sudden they make all the changes in their diet," Erdman says. "We don't even know if those changes make a difference then. But we know that if people eat that diet before getting cancer, you don't tend to get it."

Consumers also must be critical of companies' health claims about antioxidants, many of which are unregulated and unsupported by science. And studies often are funded by the industries that benefit when products are dubbed superfoods.

Bottom line — eat a balanced diet and don't get hung up on the particulars.