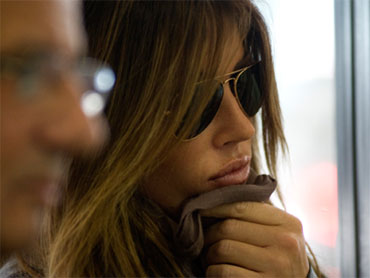 A potentially explosive news conference with an alleged mistress was canceled and more details trickled out about the car accident that started all the trouble for Tiger Woods.

The news conference in Los Angeles for Rachel Uchitel, the woman who denied a tabloid report about an affair with Woods, was canceled about an hour before it was to begin Thursday.

High-profile attorney Gloria Allred, who was to make a statement about Uchitel's relationship with golf's No. 1 player, said it was called off because of "unforeseen circumstances." Allred said she would have no further comment.

Allred's daughter, CBS News legal analyst Lisa Bloom put it bluntly: "Mr. Green has arrived," explaining that her mother would only cancel a news conference if a financial settlement of some kind was reached between Woods and Uchitel.

Bloom said the settlement likely cost Woods at least $1 million. "It has to be a done deal," Bloom speculated, saying Allred would never prevent her client's press appearance "merely based on a promise."

For the first time since last Friday, when Woods ran his SUV into a fire hydrant and a tree outside his Florida home, there were no news conferences involving police nor any statements from Woods on his Web site.

His last one was Wednesday, when he issued a statement conceding that he had "let my family down." That followed a report in Us Weekly magazine of a cocktail waitress claiming to have had a 31-month affair with Woods.

The Associated Press obtained an audio recording of an interview the Florida Highway Patrol conducted with Woods' neighbors after the accident. Troopers interviewed Jarius Adam, who called 911, and his sister, Kimberly Harris.

Harris told troopers that Woods' mother, Kultida, and mother-in-law, Barbro Holmberg, were at the scene, but the AP could not confirm that.

A voice that strongly resembles Woods' mother is heard in the background during the 911 call saying loudly, "What happened?"

A spokeswoman for Holmberg, mother of Elin Nordegren, didn't know if she was in Florida when the accident happened.

"I don't know for sure, but I don't think so," spokeswoman Ewa Malmborg said. "I have not been informed about that. She was here again working on Monday again anyway."

In the FHP interview, a trooper asked Harris about the women and if they talked to anyone at the scene.

"The cops came, the Windermere cops came first, then the security guards came," Harris said. "And then it appears Mr. Woods' mom, and Tiger's wife's mom came out after the fact. I don't know if they heard the commotion, I don't if she, his wife, left and came back. But they walked across the grass and were outside as well."

Woods' peers, meanwhile, went from talking about him to playing in his $5.75 million golf tournament.

He previously pulled out of the Chevron World Challenge at Sherwood Country Club, an 18-player event that pays $1.35 million to the winner. Participants spent most of the week taking questions on their sport's biggest star, most offering support and curious about details and some of the allegations.

More criticism came from Jesper Parnevik of Sweden, who once employed Woods' wife as a nanny and told reporters Wednesday that he owed her an apology for introducing them.

"I have lost all respect for him, primarily as a man and a father," Parnevik said in the Swedish newspaper Aftonbladet on Thursday from the PGA Tour qualifying tournament in West Palm Beach, Fla. "It doesn't even feel like it matters what he has done on the golf course. My respect for him as a person is gone. We have been nice to Tiger before, but now he only has himself to blame.

"We thought better of him, but he is not the one we thought he was."

Among star athletes Woods considers a close friend is Kobe Bryant of the Los Angeles Lakers. They had dinner in Orlando, Fla., during the NBA finals this year.

When he heard the word "Tiger" in a question Wednesday, Bryant said, "Man, get off that. I knew there was going to be one," and he ended the interview.

The crowd was smaller than usual at Sherwood, where Woods isn't playing for the second straight year. He was recovering from knee surgery in 2008, although he was still on the property.

Players knew they would be peppered with questions when they arrived, but by Thursday, it was back to birdies and bogeys.

"We haven't talked about it," Zach Johnson said. "It hasn't even been a thought."