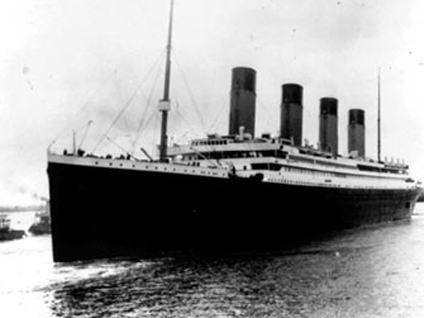 The tragic sinking of the Titanic nearly a century ago can be blamed on low-grade rivets that the ship's builders used on some parts of the ill-fated liner, two experts on metals conclude in a new book.

The company, Harland and Wolff of Belfast, Northern Ireland, needed to build the ship quickly and at reasonable cost, which may have compromised quality, said co-author Timothy Foecke. That the shipyard was building two other vessels at the same time added to the difficulty of getting the millions of rivets needed, he added.

"Under the pressure to get these ships up, they ramped up the riveters, found materials from additional suppliers, and some was not of quality," said Foecke, a metallurgist at the U.S. government's National Institute of Standards and Technology who has been studying the Titanic for a decade.

More than 1,500 people died when the Titanic, advertised as an "unsinkable" luxury liner, struck an iceberg on its maiden voyage in 1912 and went down in the North Atlantic less than three hours later.

"The company knowingly purchased weaker rivets, but I think they did it not knowing they would be purchasing something substandard enough that when they hit an iceberg their ship would sink," said co-author Jennifer Hooper McCarty, who started researching the Titanic's rivets while working on her Ph.D. at Johns Hopkins University in 1999.

On The Early Show Saturday, Jeff Glor asked McCarty if she felt the company was using sub-par iron.

"Exactly," she responded. "A rivet works by holding two plates together on a ship. And, during the collision, pressure, or load on that plate would have caused the heads of the rivets to pop open. So, the theory really is that the sub-quality iron caused weak rivets, and therefore, the seams were weak, and opened up during the collision.

McCarty says it was "an engineering decision" to use the rivets they did, "and, considering the other safety factors on the ship, they felt it would be OK to do so. I mean, it was a one-in-a-million chance that all of these events would come together and cause this disaster. So, it's difficult to say that they could have known something like this would happen."

The company disputes the idea that inferior rivets were at fault. The theory has been around for years, but McCarty and Foecke's book, "What Really Sank the Titanic: New Forensic Discoveries," published last month, outlines their extensive research into the Harland and Wolff archives and surviving rivets from the Titanic.

"It's difficult for them to be able to counterpoint all of our arguments," McCarty remarked to Glor, "given that there's so much in the (company) archives that we've gone through."

McCarty spent two years in Britain studying the company's archives and works on the training and working conditions of shipyard workers. She and Foecke also studied engineering textbooks from the 1890s and early 1900s to learn more about shipbuilding practices and materials.

"I had the opportunity to study the metallurgy of several rivets," McCarty said. "It was a process of taking thousands of images of the inside of these rivets, finding out what the structure was like, doing chemical testing and computer modeling.

"Seeing the kind of levels we saw in different areas, in different parts of the ship led us to believe they would have ordered from different people," she said, adding this may have led to the weaker rivets.

The two metallurgists tested 48 rivets from the ship and found that slag concentrations were at 9 percent, when they should have been 2 to 3 percent. The slag is a byproduct of the smelting process.

"You need the slag but you need just a little to take up the load that's applied so the iron doesn't stretch," Foecke said. "The iron becomes weak the more slag there is because the brittleness of the slag takes over and it breaks easily."

Foecke said the main question was not whether the Titanic would sink after hitting the iceberg, but how fast the ship went down.

He believes the answer is provided by the weak rivets. His analysis showed the builders used stronger steel rivets where they expected the greatest stress and weaker iron rivets for the stern and the bow, where they thought there would be less pressure, he said. But it was the ship's bow that struck the iceberg.

"Typically you want a four bar for rivets," Foecke said, using the measurement for the strongest rivets. "Some of the orders were for three bar."

Harland and Wolff spokesman Joris Minne disputed the findings. "We always say there was nothing wrong with the Titanic when it left here," he said.

When the iceberg hit the Titanic, it scraped alongside the ship. Foecke said this affected a number of seams in the bow and the weak rivets let go, putting more pressure on the strong rivets.

The company does not have an archivist, but it refers scientific questions on the Titanic to retired Harland and Wolff naval engineer David Livingstone, who also has researched the ship's sinking.

He said he largely agrees with the authors' findings on the metallic composition of the rivets, but added their conclusions that the rivets were to blame for the sinking are "misleading and incorrect" because they do not consider the ship's overall design and the historical context.

"You can't just look at the material and say it was substandard," Livingstone said. "Of course material from 100 years ago would be inferior to material today."

He said he has found no document to support the argument that Harland and Wolff knowingly used substandard material. He pointed out that the Olympic, a ship the company built at the same time using the same materials, had a long life with no troubles. The third vessel turned out in the early 1900s was attacked and sunk in World War I.

Livingstone said he is not sure why iron rivets were used in the bow and the stern but believes it may have been because a crane-mounted hydraulic rivet machine could not reach those points. He said the iron rivets were wider to compensate for the difference in strength.

Contrary to Foecke's theory, Livingstone said, the Titanic did not go down fast compared to other ships that have sunk.

He said the Titanic did not capsize - as do most sinking ships - but maintained an even keel until the last moment, going down after about 2 1/2 hours when the weight of the water it took on became too much.

William Garzke, chairman of the forensics panel of the Society of Naval Architects and Marine Engineers based in New Jersey, said wrought iron was commonly used at that time, but steel was the newer, stronger choice.

Garzke, who also has studied the Titanic sinking, said the two scientists made a good point about the variability of the rivets, but "the problem is not the metallurgy of the rivets, it was the design of the riveted joints."

He said that the company used only two rivets at the site of impact, when three would have provided more strength and durability.