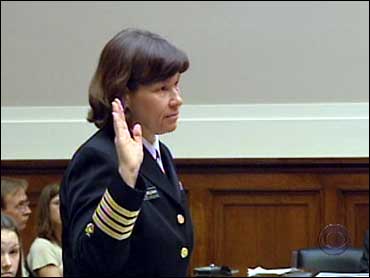 Tuesday on Capitol Hill, lawmakers heard a startling story: an insider's account of an under-the-table deal between a top government scientist and a major drug company.

Dr. Susan Molchan, a former clinical researcher inside the National Institutes of Health took an oath, then blew the whistle.

Molchan said that a collection of unused spinal fluid samples — a treasure trove of biological material, many painfully given up by Alzheimer's patients — for a study on the disease, disappeared without a trace from her laboratory's freezer at NIH.

"Some of it had been lost in freezer thaws, nothing solid, nothing that made sense. I never got a handle on what happened to them," Molchan says.

On Tuesday, a Congressional investigation sparked by Molchan revealed a secret deal between her immediate supervisor, Dr. Trey Sunderland, a renowned psychiatric researcher, and the pharmaceutical giant Pfizer ... at the same time the company was launching and refining a new Alzheimer's drug.

"If individual scientists are making use of that tissue for their own personal gain, that's something we need to know about it. It's not the right thing," said House Energy subcommittee chairman Congressman Ed Whitfield, R-Ky.

In fact, the House Energy subcommittee's report found that Sunderland provided Pfizer "access" to 3,200 tubes of spinal fluid, costing the NIH and, as a result, taxpayers, an estimated $6 million. In exchange, Sunderland reportedly received $285,000 in personal compensation.

Today, the Alzheimer's drug in question, which spinal fluid helped refine, is now the top-selling such drug in the world, generating $1.6 billion in sales last year.

"The more tissue samples you can collect these days and extract genetic information about risk and benefit, that's the future of drug development around the world," says Dr. Art Caplan, a bio-ethicist at the University of Pennsylvania.

As for Pfizer, the committee found no evidence the company had broken any NIH rules at the time or knew of any wrongdoing by Sunderland. Sunderland is expected to appear before the committee Wednesday, and take the Fifth.