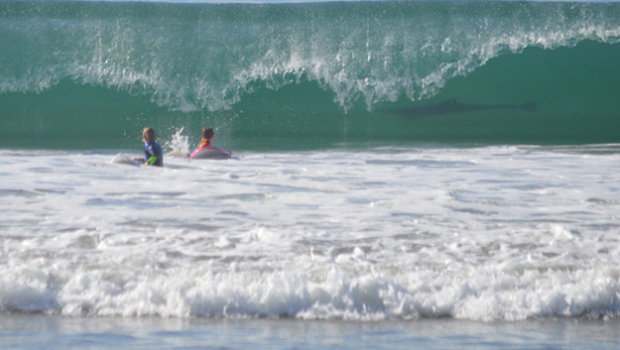 MANHATTAN BEACH, Calif. -- Say cheese or say shark? Calif. mom June Emerson was taking pictures of her 12-year-old twins surfing between noon and 1 p.m. local time Friday on Manhattan Beach, but while driving home, she noticed something strange in one of the photos, reports CBS Los Angeles.

Look to the right, and you cannot miss it.

Emerson’s Facebook page has been flooded with comments that she and her sons were definitely involved with a close encounter of the “Jaws” variety. Others see it more like “Flipper” as in a harmless dolphin.

“Another beautiful day at the beach,” she wrote on Facebook, “Big waves and apparently Big Fish! (Look into wave to right of Quinn Emerson, who’s out catching a few!) – Manhattan Beach, California.”

Whatever tail you believe, the picture definitely has put a fright into Emerson.

“I’m not sure what it was,” she told CBS2/KCAL9, “but it definitely scared me when I thought it might be a shark.”

Her son, a paddle boarder, was told by his parents that it was a dolphin.

Dolphin or shark, the family isn’t entirely sure. But they agree on one thing , that they were photobombed.