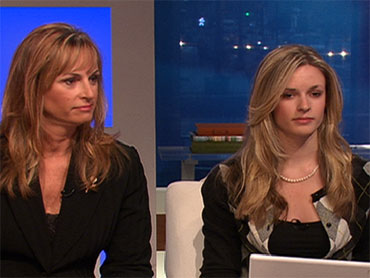 There's an uproar in a suburban Philadelphia school district over privacy and security. School officials are being accused of using webcams to find out what students are doing at home.

Halpern was referring to a federal lawsuit alleging school administrators used one such device to spy on a student in the privacy of his own home.

Karen Gotlieb, a parent of a student who attends the school, said, "I just received an e-mail from my daughter, who is very upset, saying, 'Mom, I have my laptop open in my room all the time, even when I'm changing."

The school district says the webcams are only activated when the computers are "lost or stolen."

The parents of Blake Robbins haven't spoke out yet, but in court papers filed Wednesday, they claim a school official activated the web cam last year for a different purpose, suspecting the Harriton High sophomore was "engaged in improper behavior at home." The lawsuit also claims Robbins was later confronted with a photograph from the webcam that was allegedly taken as evidence.

Lillie Coney, associate director of the Electronic Privacy Information Center, a public interest research center, said, "This definitively was not a safe or a secure even a rational thing for the school to be engaged in, if this is, in fact, what they did."

For a closer look at how parents and students are dealing with this issue, "The Early Show" turned to Savanna Williams, a sophomore at Harriton High School, and her mother, Gotlieb.

Williams said she was shocked to hear about the accusations against the school.

"Someone told me in my chem class and I e-mailed my mom right way," Williams said. "I was like, 'Mom, I have this open all the time. … This is disturbing.'"

She added the entire school is worried about what the school could potentially be watching.

Williams' mother said the possibility of this being true is a "complete violation of her privacy, of our entire home -- not just Savanna."

"They have the option to watch myself, my husband, my other child," Gotleib said. "They violated our trust. I think that's really the most significant part here is that this was a school district that we chose. We moved a thousand miles across the country specifically to be in this school district, which spoke volumes for my trust in them. And it's also quite possibly a violation of Pennsylvania law."

Rodriguez pointed out that the school district has deactivated the cameras on the laptops. However, Williams says she doesn't feel safe using her computer at home. She doesn't get changed anymore with her laptop open.

She said, "I've lost a lot of trust for my school district, and I'd like to be reassure that had I can get changed in my own bedroom with my laptop open without having to be worried that someone's watching me."

Williams said she just wants some kind of reassurance from the school.

"(I'm) not sure how they're going to do it," she said, "but (I need) something that tells me I can do things in my own home without being worried that had my principals are watching me."