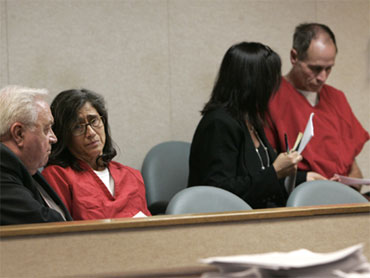 The couple accused of kidnapping and raping Jaycee Dugard will be back in court Friday.

And one topic that may come up is Nancy Garrido's apparent past drug use.

Still, says fellow CBS News legal analyst Lisa Bloom, "Certainly (her dependency on meth) will give her a diminished capacity defense, that she didn't intend to cause the harm that she did but, over the years, if somebody is taking any kind of medication or drugs over and over again, knowing the effects it has on them, juries tend to be unsympathetic to that kind of a defense."

The Garridos were arrested in August and charged in the Dugard case. They allegedly snatched the girl off the street and held her captive for 18 years in a compound in their Northern California backyard, where Jaycee raised her two daughters, whom police say Phillip fathered.

Now, sources tell CBS News that, though the compound looked primitive, the tents there held a classroom with geography maps and electricity that powered a computer.

After their release, Jaycee's aunt, Tina Dugard, marveled to reporters about how well-educated the girls were, saying, "Jaycee is a remarkable young woman who raised two beautiful daughters. They are clever, articulate, curious girls."

CBS News has also learned the Garridos hid Jaycee and the girls in plain sight, taking them out in public, to the beach, the library, and the movies. They even went trick-or-treating, with phillip garrido in a gorilla costume.

Bloom calls that "just another example of all the flags and all the warning signs that were missed by the probation officers," noting that, "The California Department of Corrections here already issued a scathing report about the fact that phillip garrido was misclassified for most of his probation, not as a high risk offender as he should been, which would have given rise to constant monitoring."

Nancy Garridl 's reported to be very frail behind bars. She's had visits from family, Kauffman says, but Phillip hasn't had any visitors.

Meanwhile, Jaycee is about to celebrate the first Christmas with her family in 18 years.