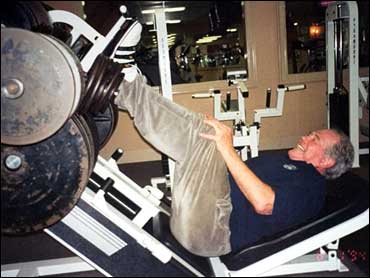 Religious broadcaster Pat Robertson says he has leg-pressed 2,000 pounds, but some say he'd be in a pretty tough spot if he tried.

The "700 Club" host's feat of strength is recounted on the Web site of his Christian Broadcasting Network, in a posting headlined "How Pat Robertson Leg Pressed 2,000 Pounds."

According to the CBN Web site, Robertson worked his way up to lifting a ton with the help of his physician, who is not named. The posting does not say when the lift occurred, but a CBN spokeswoman released photos to The Associated Press that she said showed Robertson lifting 2,000 pounds in 2003, when Robertson was 73. He is now 76.

The Web posting said two men loaded the leg-press machine with 2,000 pounds "and then let it down on Mr. Robertson, who pushed it up one rep and let it go back down again." The Web site said several people witnessed the event, and shows video of Robertson leg-pressing what appears to be 1,000 pounds.

Clay Travis of CBS SportsLine.com called the 2,000-pound assertion impossible in a column this week, writing that the leg-press record for football players at Florida State University is 665 pounds less.

"Where in the world did Robertson even find a machine that could hold 2,000 pounds at one time?" Travis asked.

Andy Zucker, a strength-training coach at Old Dominion University in Norfolk, said leg presses of more than 1,000 pounds represent "a Herculean effort, and 2,000 pounds is a whole other story."

CBN spokeswoman Angell Vasko said Friday that Robertson was not available for comment because he was "out of pocket" for the long holiday weekend.

Vasko said she has not seen Robertson leg-press 2,000 pounds but that it's not "a huge shocker" that he could.

"Pat is so healthy," she said. "This is something he trained for over an extended period of time. He lives a very healthy, regimented life."

One of the photos Vasko released had a digital date stamp of 1994, although she said Robertson performed the leg press in 2003. Vasko said that perhaps the date was not set properly on the camera.

The CBN Web site attributes Robertson's energy in part to "his age-defying protein shake." The site offers a recipe for the shake, which contains ingredients such as soy protein isolate, whey protein isolate, flaxseed oil and apple cider vinegar.