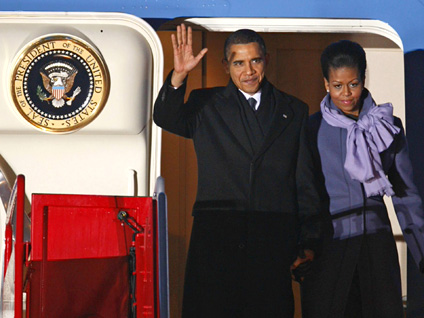 Prince Charles has spoken in support of his ancestor, King George III, widely, if wrongly, regarded as the "mad" monarch who lost Britain its American colonies.

Interviewed for a TV documentary, Charles said George III might have calmed American revolutionaries bent on severing ties with Britain if a royal visit across the Atlantic had been possible in 1776, the year the 13 colonies declared independence.

George's illness, now believed to have been rooted in the genetic disorder porphyria, was the subject of the award-winning 1994 film "The Madness Of King George," in which the monarch was played by British actor Nigel Hawthorne.

Charles told "Timewatch" that George, who lived from 1738 to 1820, was one of Britain's most dutiful, cultured and misunderstood rulers, who studied the arts and sciences and was involved in agriculture, astronomy, architecture and clock-making, as well as collecting books, medals, paintings and drawings.

"For many years, I've been fascinated by my ancestor," the prince told the program.

"Yet history remembered him above all as the 'mad king' or the king who lost America' — this is a travesty."

Like Charles, George loved the countryside and had a strong interest in architecture. And, like Charles, he was mocked for his interest in agriculture: Charles once said he talked to plants, and George was lampooned as "Farmer George."

"He used to walk around the countryside (west of London) at Windsor and Kew alone, talking to neighbors and farm workers and had a genuine interest in the well-being of every single estate worker," Charles told the program.

"The sight of the king chatting about agricultural prices, hog breeding, the coming of the harvest and so on, struck some as being eccentric and unbecoming. Cartoonists of the day mocked him for it."