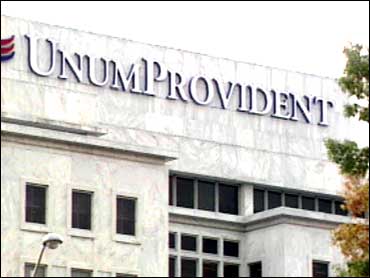 If you're one of the 50 million Americans who has money deducted from his or her paycheck to pay for disability insurance, or if you've purchased a disability policy on your own, you may think you're covered if you're injured or too sick to work. But don't be too sure.

A number of people who worked at UnumProvident, the giant of the disability insurance business, whose clients include CBS, say that the company's management puts tremendous pressure on claims handlers to deny new claims and shut down existing ones. They also say that many UnumProvident policy holders- who are obviously disabled – are left out in the cold.

UnumProvident provides 17 million Americans with disability insurance privately or through their employers. It is the largest disability insurance company by far. Of America's largest corporations, 22 percent, including CBS, use it. UnumProvident declined to talk to 60 Minutes on camera, but its executives repeatedly denied any targets were set for saving money by closing claims. They said the company occasionally makes mistakes, as it processes 400,000 claims a year.

Former Unum Provident workers accuse the company of cheating disabled people in an effort to save money. One worker says bonuses were awarded to some managers who closed especially large claims. Bradley's report on the UnumProvident Insurance Company will be broadcast on 60 Minutes Sunday, Nov. 17, at 7 p.m. ET/PT.

Among those who had a policy with the company was Dr. John Tedesco. Today, Dr. Tedesco does part-time diagnostic work, but he used to be a successful eye surgeon. Then, four years ago, he developed a tremor in his right hand.

"I knew that if I tried to operate on somebody, I might hurt them. I might blind them," he says. So he had to stop.

For six years, Dr. Tedesco had paid for an insurance policy which guaranteed him a decent income if he could no longer do surgery. He filed a claim with UnumProvident, and the company paid his claim for four months. Then a claims handler sent Dr. Tedesco a letter.

"Basically, the letter said 'We're cutting off your benefits. We don't think you're disabled. And you're not entitled to any benefits.'" says Tedesco.

Three years ago, Dr. Tedesco was diagnosed with Parkinson's Disease. He found he couldn't keep his hands steady enough to do routine eye exams, let alone surgery. Three physicians said he was too disabled to operate. But the company still wouldn't provide him with benefits.

Tedesco sued the company, and a jury awarded him $36 million. To avoid a lengthy appeal, Dr. Tedesco settled with UnumProvident for an undisclosed sum.

One former employee, Gina Hartley, says each department had monthly savings goals set for them, which they had to reach by closing cases. She says the pressure to reach these goals often led to the termination of legitimate policies. Hartley was one of five former employees who agreed to go on camera.

Bonuses were apparently awarded for successfully closing a big claim, Hartley says. "There were staff meetings that we sat in, that the manager would say, 'So-and-so just closed a $2 million claim today,' and everybody would give them a hand and, two or three weeks later, lo and behold, that person would end up being presented with a bonus, a check, money," Hartley says.

More than a dozen current and former employees of UnumProvident confirmed some or all of Hartley's allegations. In the last five years, UnumProvident has been sued almost 3,000 times over closed claims.

Chicago students and parents get free college
Thanks for reading CBS NEWS.
Create your free account or log in
for more features.
View CBS News In
CBS News App Open
Chrome Safari Continue
Be the first to know
Get browser notifications for breaking news, live events, and exclusive reporting.