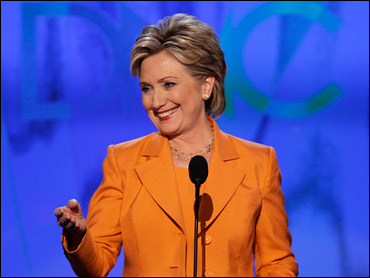 In her speech to the Democratic convention Tuesday night, Hillary Clinton urged fellow Democrats to vote for Barack Obama, and she did it in no uncertain terms -- verbally.

But did her body language match her words?

Navarro, who wrote the book "What Every BODY is Saying: An Ex-FBI Agent's Guide to Speed-Reading People," explained to Early Show co-anchor Maggie Rodriguez Wednesday, "We need non-verbal (cues) to tell us what is important, what is significant, and what should we be looking for."

And Clinton's non-verbals, he says, were revealing.

"What we wanted to see was a Churchillian speech, something that would move her candidate to cross that magic fence. And she delivered a speech, but the gestures -- the non-verbals that give us the emotion -- really weren't there."

Navarro later added, "I think her message was supposed to be, 'Hey, go with me and let's vote for Barack.' There should have been a lot more emotive displays, and we just simply did not see that."

For instance, "One of the things that you see is she has very limited hand gestures. And we look for hand gestures to tell us what's important. So, when we see them out, when we see them up, this is significant. And we saw them just a few times last night, but not enough. This was not an impassioned speech."

On the other hand, Rodriguez observed, "When she was talking about things that were important to her, I did notice (non-verbals), like healthcare."

"Health care -- there was a lot of self-touching," Navarro agreed. "When she was talking about McCain, there was a lot of emphasis, when she talked about her husband. We saw more non-verbals from the audience in regards to these issues than we saw from her."

Perhaps, Rodriguez suggested, Clinton just isn't one who uses her hands much while speaking. For example, "I noticed that she does something with her shoulders. Maybe that's how she emphasizes."

"One of the ways that we emphasize is by defying gravity," Navarro pointed out, "and our shoulders come up, or we stand on our toes. She does that a little bit. But that's so weak that we tend to miss it.

"Now, toward the end of her speech, we saw her hands come up and high and so forth. This is where emotion was truly there."

Rodriguez said she noticed Michelle Obama in the audience "pursing her lips a little bit" at times. Did that mean Michelle was as a little bit uncomfortable during Clinton's speech?

"It depends," Navarro replied, "on when you see her. I think a couple of times there when they were picturing her, perhaps she was thinking, 'This should be a little better' and so forth. (But) I think Michelle was very receptive. Her non-verbals actually were great at the beginning as she was, you know, you saw a lot of head tilt, which is indicative of 'I'm receptive,' and so forth."

Navarro was a big fan of Michelle's speech Monday night,

"I think it was a home run," Navarro observed. "She's a beautiful woman. You know, her hugs are genuine. She has those beautiful high cheek bones that we see in models. The broad shoulders. (She had a wide stance). Her gestures are huge. They are very encompassing. These things draw us in. These are the things we look for. Otherwise, just hand out a memo."

Exercise Gives The Brain A Workout, Too