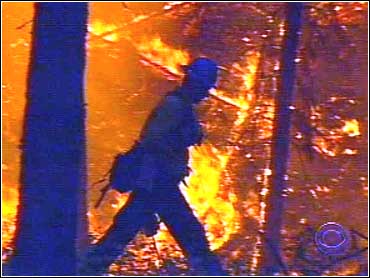 As wildfires scorch America's West, there is evidence the federal government didn't set aside enough money to prepare for what was expected to be a fearsome 2000 fire season.

CBS News Correspondent Sandra Hughes reports a January memo from Lester Rosenkrance, then the fire program director at the Bureau of Land Management, to BLM Director Tom Fry warned, "We are placing the public and property at greater risk as our ability to respond quickly and aggressively to wild land fires decreases."

"We knowingly ask our firefighters to work longer hours in more dangerous circumstances," Rosenkrance, who has since retired, wrote. "To do so, in the name of budget cuts, is simply unconscionable."

Federal land agencies got only about 85 percent of the money needed for wildfire preparations from 1997 through 1999, Congress' General Accounting Office reported last year.

"We're giving them what they need," Ahern said. "The real problem this summer is not budgeting. The problem is, you have fires you haven't seen in half a century."

"These are moving targets. We respond as we move and we'll put the resources that are required to meet the challenger," said John Berry, Assistant Secretary of the Interior. "That's what we're committed to do."

Funding issues aside, it's likely that some of the 64,556 fires that have burned 4.3 million acres so far this year couldn't have been averted, even though officials knew for months that this fire season would probably bring disaster.

The reason they feared a bad fire season was that much of the West is in the grip of dryer than dry drought spawned by La Nina. The weather system redirects the jet stream, diverting moisture away from the West.

The realization of those fears is etched across the West in scorched earth and smoky skies. Currently, the National Interagency Fire Center (NIFC)reports 65 fires burning that have covered a total of 847,264 acres in 10 states.

Before the new questions about funding, the Interior Department was criticized earlier this fire season, when a New Mexico fire raged out of control after it was deliberately set by the National Park Service.

And the money Congress did approve, a Department of Interior briefing paper said, "favors operations at the expense of preparedness for wildland fire."

President Clinton then asked Congress in February for $200 million for fire protection. The White House predicted that without additional money, the government fire-fighting budget would burn up by mid-June.

While the House quickly passed a bill allotting $150 million, the Senate didn't approve it until late June.

Whether their budget was busted or not, firefighters in the West will receive still more help from the military over the next few days. An Army battalion is on its way to the firelines in Montana. One Army and one Marine unit are already helping battle blazes in Idaho.