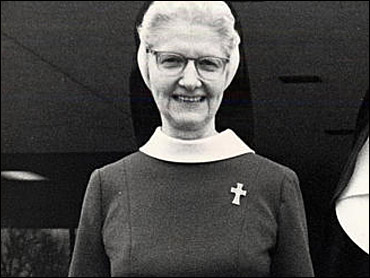 One of the first police officers at the scene of the 1980 killing of Sister Margaret Ann Pahl in Toledo, Ohio, told CBS News Tuesday that he believed the slaying was not investigated as vigorously as it should have been.

The Rev. Gerald Robinson, a Roman Cathloc priest who worked at the same hospital as the 71-year-old nun, was charged this weekend with the bizarre, ritualistic slaying. He is being held on $200,000 bond.

In an interview on The Early Show, retired Toledo police officer Dave Davison said Robinson's was the only name ever mentioned as a suspect when the crime was first investigated in 1980.

"Everybody I talked to - and I talked to dozens - said either Father Robinson or that they didn't know his name, they said it was a priest," Davison told co-anchor Harry Smith. "I mean, there was no other name mentioned."

Davison, a patrolman at the time, was not involved in the investigation. He happened to be among the first at the scene because he was having breakfast in the hospital cafeteria when the nun's body was found in the chapel.

"A nurse ran down, told us that we should get up to the chapel, that there was a nun dead," Davison recalls. "We ran up. We got there before the call came into the police department, because everybody at the hospital knew us."

The investigation that followed "seemed to go nowhere," the retired officer said. "I mean, you talk to the guys, ask what progress. And basically they would toss you off. So it didn't go anywhere."

One of the police investigators at the time now says that he thought that the case had not been thoroughly investigated, and Davison agrees, suggesting that authorities may have been pressured to keep the investigation stalled.

"You really don't want to call it a coverup," Davison said, noting "I think the diocese took control of him." The priest was removed from Mercy Hospital, where he was practicing, but stayed in Toledo.

"You have to remember on our department, the people in the upper command levels that had control on this are good Catholics. And I'm sure that some kind of friendly deal was cut. I think basically he was under house arrest under the church care."

After he retired, Davison petitioned to get information on the case, but the status of the case was changed. "They started giving me the information," he said. "They reread what they were giving me. It was a cold case, inactive. They put it in active status, which under the Freedom of Information Act, they don't have to give you anything. It stopped. It dried up."

Although Father Robinson officiated at the nun's funeral, he remained a suspect, but time passed without anyone being charged.

Then just last year, police got a break. A Toledo woman came forward claiming she'd been sexually abused as a child by Catholic priests during Satanic rituals. Although her claims haven't been proven, her mention of Father Robinson convinced detectives to re-open the murder case.

Robinson made an initial appearance Monday in Toledo Municipal Court. Judge Mary Trimboli set bail at $200,000 and scheduled a preliminary hearing for next Monday.

No plea was entered and Robinson did not speak during the brief court session.

After the hearing, friends and supporters of the priest were trying to raise bail money, said Robinson's attorney, John Thebes.

"I think he's over the initial shock," Thebes said. He said he expects the case to be presented to a grand jury this week.

He said the case would be difficult to prosecute.

"Witnesses die, witnesses' memories become faded over time," he said. "Twenty-four years is a heck of a long time. It's difficult to ascertain who was where, who said what. There are many, many issues that have to be delved into."

Police detective Steve Forrester and Tom Ross, an investigator with the Lucas County prosecutor's office, told The Blade newspaper that the nun's killing was part of a "ceremony" in the chapel. They would not elaborate.

In December, authorities re-examined old evidence and concluded that the murder weapon, which they did not identify, was "in the control of the suspect." They used "blood transfer patterns," a rarely used technique that analyzes the patterns made when an item is laid down. DNA evidence was not a factor, Forrester said.

A message seeking additional comment was left with Ross on Sunday.

The woman whose allegations led to the reopening of the case testified before the Diocesan Review Board on June 11 and wrote a detailed statement alleging years of abuse by priests during her childhood.

"She did mention Father Robinson and that he was involved in the ritualistic abuse of her," said Claudia Vercelloti, a director of the Toledo office for Survivors Network of those Abused by Priests and has been in contact with the woman.

The woman, now in her 40s, described satanic ceremonies in which priests placed her in a coffin filled with cockroaches, forced her to ingest what she believed to be a human eyeball and penetrated her with a snake "to consecrate these orifices to Satan."

She also alleged that the clerics killed an infant and a 3-year-old child, performed an abortion on her and mutilated dogs during the rituals, according to a copy of her statement.

Before his arrest, Robinson was performing pastoral care at nursing homes and hospitals in the Toledo area, the Toledo diocese said.

Vercelloti said on Sunday that the woman did not know that Robinson had been a suspect in Sister Pahl's killing. "I don't know if she knew what she was setting in motion," she said.

The woman's allegations were brought to the attention of prosecutors in a letter received in December, assistant prosecutor Gary Cook said Monday. He would not say who sent the letter.

The diocese had decided against giving the allegations to authorities, said Sally Oberski, a diocese spokeswoman.

"They were found to be non-credible," she said Sunday. The allegations were against several priests and Robinson's "name was mentioned among several others."

Vercelloti said the diocese should have given the information to police and prosecutors because Robinson had been a suspect in the nun's death.