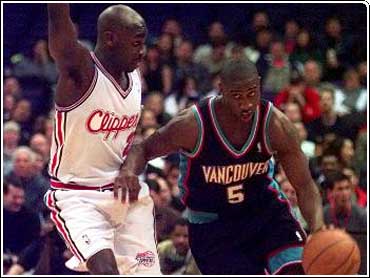 Michael Dickerson had a pretty good night for someone who couldn't even hit the rim from five feet away on his first shot.

"I thought it was going to be hard, long night," Dickerson said. "I have to thank my teammates for getting me the ball in the right situations. I was penetrating, driving to the basket and laying the ball up. Then in the fourth quarter, I was saying to myself, 'Man, I've made a lot of shots."

Dickerson, obtained from Houston in the trade that sent rookie Steve Francis to the Rockets, bettered his previous high-scoring game of 31 points, set May 4 against Minnesota. He was one point shy of the club record, set by Bryant Reeves on Jan. 15, 1998 at Boston.

"I didn't know that till I came to the bench and 'Big Country' told me, so I guess he had the record," Dickerson said. "I missed two free throws late in the game, and I usually don't do that."

Dickerson's highest-scoring game in college was 32 points, and he had a 47-point game in high school.

"He'll get 50 in a game one time, so the record will fall," said coach Lionel Hollins, who sat Dickerson down with 1:52 remaining.

"He's just a young player who's learning and developing and trying to find his niche. Mike is really quick, and when he shoots the ball really well, guys have to honor his shot."

Shareef Abdur-Rahim scored 10 of his 22 points in the fourth quarter for the Grizzlies, who were four points shy of their best offensive output of the season. Vancouver won for the fourth time in 14 games despite the absence of Mak West with stomach flu and Cherokee Parks because of a bruised right knee.

The loss was the sixth straight and 20th in 22 games for the Clippers, who only dressed eight players because of injuries to Tyrone Nesby, Eric Murdock, Brian Skinner and leading scorer Maurice Taylor. Derek Anderson led Los Angeles with 29 points.

The Clippers got no closer than 13 points in the fourth quarter.

"Mike got going early and everybody rode him and got behind him and encouraged him to keep going," Abdur-Rahim said.

After recording a season-worst 33 percent shooting on Tuesday at Phoenix, Vancouver missed six of its first eight shots. But the Grizzlies turned seven Clipper turnovers and nine points by Dickerson into a 20-4 run that turned a nine-point deficit into a 22-15 lead.

"With all those guys out, we couldn't do much out there," said interim coach Jim Todd, 0-4 since replacing the fired Chris Ford. "We only had eight guys out there. We started out fairly well, but just ran out of gas."

The Clippers, who blew leads of 16 points to Chicago and 18 points at Portland in their previous two games, used their 14th different starting lineup this season.

Forward Anthony Avent, who played 71 games for the Grizzlies in 1995-96, made his first start as a Clipper in place of Taylor and picked up three fouls in the first 4:46. He fouled out with 4:21 to play.