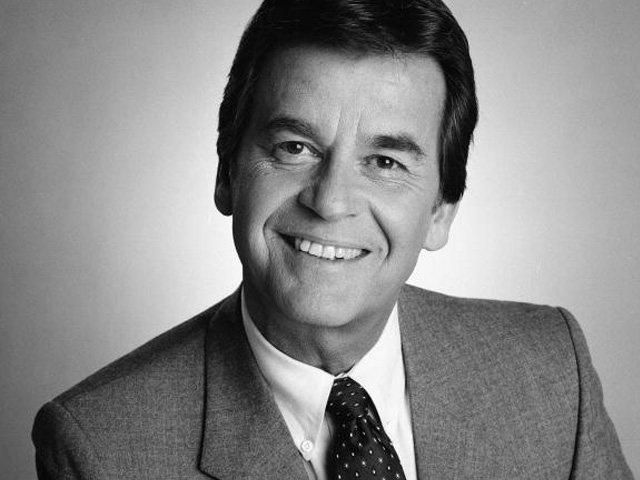 (CBS/AP) Host and TV producer Dick Clark has died. He was 82.

Spokesman Paul Shefrin said the "American Bandstand" creator had a heart attack Wednesday morning at Saint John's hospital in Santa Monica, a day after he was admitted for an outpatient procedure.

Long dubbed "the world's oldest teenager" because of his boyish appearance, Clark bridged the rebellious new music scene and traditional show business, and was equally comfortable whether chatting about music with Sam Cooke or bantering with Ed McMahon about TV bloopers. He thrived as the founder of Dick Clark Productions, supplying movies, game and music shows, beauty contests and more to TV. Among his credits: "The $25,000 Pyramid," "TV's Bloopers and Practical Jokes" and the American Music Awards.

For a time in the 1980s, he had shows on all three networks and was listed among the Forbes 400 of wealthiest Americans. Clark also was part of radio as partner in the United Stations Radio Networks, which provided programs - including Clark's - to thousands of stations.

"There's hardly any segment of the population that doesn't see what I do," Clark told The Associated Press in a 1985 interview.

"It can be embarrassing. People come up to me and say, 'I love your show,' and I have no idea which one they're talking about."

The original "American Bandstand" was one of network TV's longest-running series as part of ABC's daytime lineup from 1957 to 1987. It later aired for a year in syndication and briefly on the USA Network. Over the years, it introduced stars ranging from Buddy Holly to Madonna. The show's status as an American cultural institution was solidified when Clark donated Bandstand's original podium and backdrop to the Smithsonian Institution.

Clark joined "Bandstand" in 1956 after Bob Horn, who'd been the host since its 1952 debut, was fired. Under Clark's guidance, it went from a local Philadelphia show to a national phenomenon.

"I played records, the kids danced, and America watched," was how Clark once described the series' simplicity. In his 1958 hit "Sweet Little Sixteen," Chuck Berry sang that "they'll be rocking on Bandstand, Philadelphia, P-A."

As a host, he had the smooth delivery of a seasoned radio announcer. As a producer, he had an ear for a hit record. He also knew how to make wary adults welcome this odd new breed of music in their homes.

Clark endured accusations that he was in with the squares, with critic Lester Bangs defining Bandstand as "a leggily acceptable euphemism of the teenage experience." In a 1985 interview, Clark acknowledged the complaints. "But I knew at the time that if we didn't make the presentation to the older generation palatable, it could kill it."

"So along with Little Richard and Chuck Berry and the Platters and the Crows and the Jayhawks ... the boys wore coats and ties and the girls combed their hair and they all looked like sweet little kids into a high school dance," he said.

But Clark defended pop artists and artistic freedom, the Rock and Roll Hall of Fame said in an online biography of the 1993 inductee. He helped give black artists their due by playing original R&B recordings instead of cover versions by white performers, and he condemned censorship.

His stroke in December 2004 forced him to miss his annual appearance on "Dick Clark's New Year's Rockin' Eve." He returned the following year and, although his speech at times was difficult to understand, many,  including other stroke victims,  praised his bravery.

Still speaking with difficulty, he continued taking part in his New Year's shows, though in a diminished role. Ryan Seacrest became the main host.

"I'm just thankful I'm still able to enjoy this once-a-year treat," he told The Associated Press by e-mail in December 2008 as another New Year's Eve approached.

He was honored at the Emmy Awards in 2006, telling the crowd: "I have accomplished my childhood dream, to be in show business. Everybody should be so lucky to have their dreams come true. I've been truly blessed."

He was born Richard Wagstaff Clark in Mount Vernon, N.Y., in 1929. His father, Richard Augustus Clark, was a sales manager who worked in radio.

Clark idolized his athletic older brother, Bradley, who was killed in World War II. In his 1976 autobiography, "Rock, Roll & Remember," Clark recalled how radio helped ease his loneliness and turned him into a fan of Steve Allen, Arthur Godfrey and other popular hosts.

Clark began his career in the mailroom of a Utica, N.Y., radio station in 1945. By age 26, he was a broadcasting veteran, with nine years' experience on radio and TV stations in Syracuse and Utica, N.Y., and Philadelphia. He held a bachelor's degree from Syracuse University. While in Philadelphia, Clark befriended Ed McMahon, who later credited Clark for introducing him to his future "Tonight Show" boss, Johnny Carson.

In the 1960s, "American Bandstand" moved from black-and-white to color, from weekday broadcasts to once-a-week Saturday shows and from Philadelphia to Los Angeles. Although its influence started to ebb, it still featured some of the biggest stars of each decade, whether Janis Joplin, the Jackson 5, Talking Heads or Prince.

But Clark never did book two of rock's iconic groups, the Beatles and the Rolling Stones. Elvis Presley also never performed, although Clark managed an on-air telephone interview while Presley was in the Army.

When Michael Jackson died in June 2009, Clark recalled working with him since he was a child, adding, "of all the thousands of entertainers I have worked with, Michael was THE most outstanding. Many have tried and will try to copy him, but his talent will never be matched."

Clark kept more than records spinning with his Dick Clark Productions. Its credits included the Academy of Country Music and Golden Globe awards; TV movies including the Emmy-winning "The Woman Who Willed a Miracle" (1984), the "$25,000 Pyramid" game show and the 1985 film "Remo Williams: The Adventure Begins." Clark himself made a cameo on "The Fresh Prince of Bel-Air" and a dramatic appearance as a witness on the original "Perry Mason." He was an involuntary part of Michael Moore's Academy Award-winning "Bowling for Columbine," in which Clark is seen brushing off Moore as the filmmaker confronts him about working conditions at a restaurant owned by Clark.

In 1974, at ABC's request, Clark created the American Music Awards after the network lost the broadcast rights to the Grammy Awards.

He was also an author, with "Dick Clark's American Bandstand" and such self-help books as "Dick Clark's Program for Success in Your Business and Personal Life" and "Looking Great, Staying Young." His unchanging looks inspired a joke in "Peggy Sue Gets Married," the 1986 comedy starring Kathleen Turner as an unhappy wife and mother transported back to 1960. Watching Clark on a black-and-white TV set, she shakes her head in amazement, "Look at that man, he never ages."

Clark's clean-cut image survived a music industry scandal. In 1960, during a congressional investigation of "payola" or bribery in the record and radio industry, Clark was called on to testify.

He was cleared of any suspicions but was required by ABC to divest himself of record-company interests to avoid any appearance of a conflict of interest. The demand cost him $8 million, Clark once estimated. His holdings included partial ownership of Swan Records, which later released the first U.S. version of the Beatles' smash "She Loves You."

In 2004, Clark announced plans for a revamped version of "American Bandstand." The show, produced with "American Idol" creator Simon Fuller, was to feature a host other than Clark.

He was diagnosed with type 2 diabetes in 1994 and served as spokesman for the American Association of Diabetes Educators.