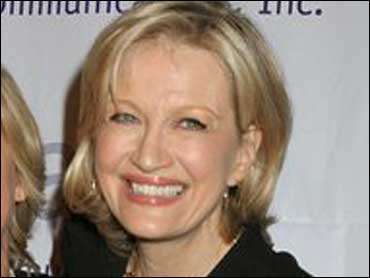 Diane Sawyer exited ABC's "Good Morning America" on Friday with an emotional moment that recalled the biggest story of her time on the show: meeting the children born after their fathers were killed in the Sept. 11 terrorist attacks.

It was a sobering interlude during a nostalgic two hours of video clips, celebrity goodbyes and tearful hugs. The morning news show devoted almost its entire broadcast to a salute to Sawyer, who is replacing her retiring former partner, Charles Gibson, as "World News" anchor.

The reunion of 9/11 children recalled how "Good Morning America" brought them together as babies on the first anniversary of the attack. The twin girls that Sawyer held in both arms that day, now 8, walked on the set carrying roses.

"Thank you and bless you," Sawyer said.

Sawyer will be replaced by ABC's chief Washington correspondent, George Stephanopoulos, on Monday. He was all business during his first appearance on the set Friday, contributing to a story about five Americans with alleged terrorist links who were detained in Pakistan. Then Sawyer showed him the ropes, promising to clean out the on-set drawer she had stuffed with hand sanitizer, brushes and the like.

"We'll do a full suck-up here," Stephanopoulos said. "I am scared to death to follow you in this job."

In a slightly awkward moment, Stephanopoulos was congratulated by Chris Cuomo, the newsreader who was also considered for the anchor job. It was Cuomo's last morning, too. He is to become "20/20" co-anchor and will be replaced on "Good Morning America" by Juju Chang.

"The hardest part of this job for me is knowing my husband is picking out my kids' clothes in the morning," said Chang, who is married to PBS executive Neal Shapiro.

The rest of the show was all about Sawyer, brought in to "GMA" with Gibson in January 1999 when it was in a ratings free-fall. What was expected to be a temporary hitch of a few months turned in to nearly 11 years.

"My heart is smiling, and the privilege of sharing my mornings with all of you has been more than I can say," she said.

With the group hugs and inside jokes, the quartet of Sawyer, co-anchor Robin Roberts, Cuomo and weather forecaster Sam Champion tried to emphasize the "family" aspect of a morning show so crucial to hooking viewers. The song "We Are Family" played in the background to drive the point home.

ABC aired a clip package of Sawyer's news reports from around the world - starting with Kabul, Afghanistan, where NBC rival Matt Lauer was this week. ABC said that Sawyer had flown some 346,205 miles while on "GMA," or nearly 14 times around the world.

There was also the now-expected package of morning show bloopers and oddball moments: Sawyer frying chicken with Aretha Franklin; dancing with John Travolta; riding a camel and hearing Bruce Willis confess of his longtime crush on her.

Roberts offered a champagne toast at the end.