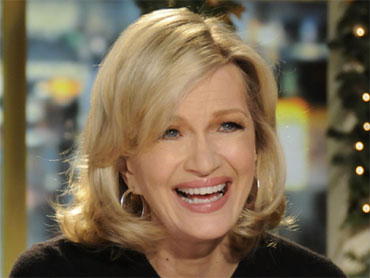 Diane Sawyer was all business on a busy first day as anchor of ABC News' flagship evening newscast on Monday, save for a brief salute at the end to Charles Gibson, whose retirement opened the job to her.

"For you, Charlie Gibson, I hope you had a good day and a great night," Sawyer said, a reference to Gibson's usual signoff.

The centerpiece of the opening broadcast was Sawyer's interview with Iranian President Mahmoud Ahmadinejad, conducted over the weekend. Sawyer confronted Ahmadinejad on a supposed "smoking gun" document that tied Iran to development of nuclear weapons. The president, who referred to Sawyer as "respectable lady," said the document was a fabrication.

Women now hold two of the three top jobs on what have always been considered the most prestigious newscasts on broadcast TV. Three years ago, CBS' Katie Couric became the first woman to hold the job by herself.

ABC has deliberately downplayed the transition on "World News." Some of the minor changes promised by ABC executives, including the show's first update of on-air graphics in five years, were evident.

ABC also plans to make use of Sawyer's conversational style, which was on display during on-air Q-and-A's with Jonathan Karl and George Stephanopoulos on health care reform, Lisa Stark on holiday travel and David Muir on holiday gift-giving. Sawyer used a question to Stark at the end of her report to briefly insert news about new rules about how long airlines can keep passengers on idling flights.

The show also featured some plainspoken consumer pieces, including Dan Harris answering reader questions about what the health care reform might mean to them, and Muir discussing what the weekend's major snowstorm in the Northeast might mean for gifts ordered online.

No mention was made that it was Sawyer's first night on the job. Her greeting: "Good evening and it is so good to be here with you tonight."

The show's only real glitch came shortly before a commercial break. Sawyer was previewing a story on actress Brittany Murphy's death and a picture of Ahmadinejad appeared on the screen.

A veteran TV newscaster with a stint on CBS' "60 Minutes" in her background, Sawyer has co-anchored ABC's "Good Morning America" for the past decade. Her 64th birthday is Tuesday.

"World News" is a solid No. 2 in the evening news ratings. NBC's top-rated "Nightly News" with Brian Williams has been consolidating its strength, winning 60 of the past 61 weeks. NBC had its biggest advantage during the November ratings "sweeps" since 2005, according to the Nielsen Co.

Evening news viewership habits tend to be steady, except in times of transition. Viewers unfamiliar with ABC may tune in to check how Sawyer is doing - just as they did with Couric in 2006 - yet Gibson fans may be more inclined to surf around, too.

This period of churn is more important to third-placed CBS, and the "CBS Evening News" is preparing to take a strong run at ABC. But if Couric doesn't get more people to see whether CBS is fulfilling its promise of offering a more serious, hard-hitting broadcast, viewers may see those claims as just talk, said Andrew Tyndall, a news consultant who studies the content of network newscasts.

ABC has been through several anchor transitions, starting with Peter Jennings' departure and death from lung cancer. The wounding of Bob Woodruff in a bomb blast derailed his pairing with Elizabeth Vargas, and Gibson had been on duty since 2006.

"Any transition is difficult on an audience," said Jon Banner, executive producer of "World News." "We have had more than our fair share. Thankfully, this one we have been able to do some planning around."

ABC News President David Westin said the transition to Sawyer has been kept deliberately low-key. She hasn't been giving interviews, her new role hasn't been promoted outside of the network and she's starting on a holiday week where many viewers are preoccupied.

"In the end, this is not about the first day, and it is not about us," Westin wrote in a memo to his staff late last week. "Our focus must be and remain on the audience and what matters to the people we serve every day. If we show a steadfast devotion to serving that audience, all our programs will be successful over the long-term."
By DAVID BAUDER