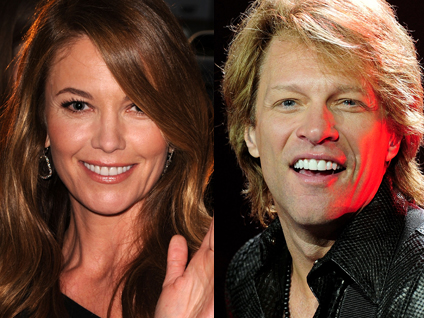 NEW YORK (CBS) Diane Lane isn't saying much about her relationship with rocker Jon Bon Jovi - but a new book is.

The actress says she's "a little fuzzy" on the details of her relationship and breakup with the rocker in the '80s.

Lane "was young and wild and loved to party. But she loved to party so much that Jon caught her partying with Richie Sambora," Bozzett writes in the book, according to the Daily News. "That wasn't a good day for Jon's relationship with Diane, to say nothing of Jon-Richie relations."

"Some people will just try and sell a book, and I can't blame them," Lane said, adding, "They can make up what they like. What was that line from the Cars' song, 'Let the Good Times Roll'? 'Let them say what they want, baby!'"

While she admits to being a "a little rough-and-tumble" back then, she says, "it got me in much less trouble than would even show up on today's radar."

Lane has been married to actor Josh Brolin since 2004. Bon Jovi married his high school sweetheart, Dorothea Parker, in 1989.

Ashley McBryde on new music and Opry invite
Thanks for reading CBS NEWS.
Create your free account or log in
for more features.
View CBS News In
CBS News App Open
Chrome Safari Continue
Be the first to know
Get browser notifications for breaking news, live events, and exclusive reporting.