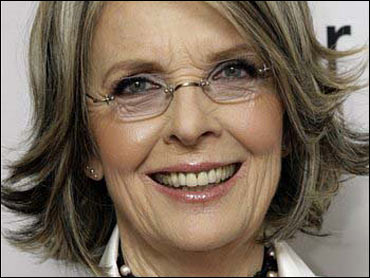 Diane Keaton says she planned to wait until she was in a "strong and substantive" relationship before becoming a mother - but that never happened for her.

"Motherhood was not an urge I couldn't resist, it was more like a thought I'd been thinking for a very long time," says Keaton, who celebrates her 62nd birthday Saturday. "So I plunged in."

The Oscar-winning actress, whose past romantic partners include Woody Allen and Warren Beatty, adopted daughter Dexter, now 12, and son Duke, 7.

"I've had such an unusual life. Obviously career-oriented. I was happy to be a daughter well into my 40s. That was something that meant a lot to me," Keaton tells Ladies' Home Journal in its February issue, on newsstands next Tuesday. "I didn't think that I was ever going to be prepared to be a mother."

"I wanted to be in a good relationship. Those good relationships that are strong and substantive never happened for me, and that prolonged my indecisiveness," she says. "When I fell in love that took over my life for a long time."

She "had years of selfishness," Keaton says, but being a mother is better.

Like many mothers, Keaton is capable of embarrassing her children.

"I like to take them to school in my bare feet," she says, giving their reaction: "'Can't you be normal, lady?'"

Keaton co-stars with Queen Latifah and Katie Holmes in the upcoming film "Mad Money," about three Federal Reserve Bank employees who plot to steal money that is about to be destroyed.

Holmes "took that role and played with it, she was running around, constantly dancing," Keaton says. "She's courageous and adventurous and wants - and is having - a very big life. And she's handling it with such grace. I wish I could have done that."