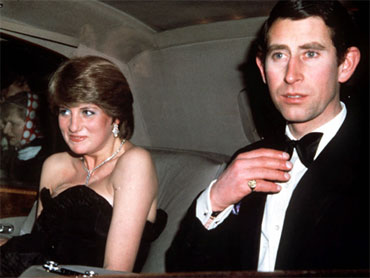 It was black and strapless, with a sassy sequined flounce at the bodice and a gloriously full, swishy skirt.

The dress was, Lady Diana Spencer thought, so grown-up, just right for her first official engagement after the announcement she was to marry Prince Charles.

But when photographs emerged of the then 19-year-old Diana emerging from a limousine at a March, 1981 charity event - all creamy shoulders and ample decolletage - there was a minor scandal over the revealing cut.

According to Elizabeth Emanuel, who designed the ball gown with her husband David, they didn't realize the furor the dress would cause.

"She just looked fantastic. At that time, she was curvy. Not fat in any way, but she had cleavage - we love cleavage. And she looked great in this dress," Emanuel said in an interview Friday. "We in no way expected there to be such a reaction. And I think from that moment on, Diana became a fashion icon."

The dress had been missing for years until David Emanuel recently discovered it in a plastic bag at his home.

Along with other garments worn by Diana and designed by the Emanuels, it is to be auctioned off June 8 in a sale that includes the silk chiffon blouse chosen for the Princess of Wales' official engagement portrait by Lord Snowdon, and the calico prototype used to fit her famous ivory wedding gown.

Prince Charles reportedly didn't like the ballgown she wore to the charity event, because he thought black was for people in mourning. Diana thought it was tres chic, and anyway, she had nothing else to wear.

"She was unsophisticated at that point, and when I look at the wedding dress and the black ballgown I can see a young girl's dream of the ultimate party dress or romantic dress," said auctioneer Kerry Taylor, whose eponymous firm is handling the sale. "So there's an innocence about these early pieces.

For the editors of Britain's voracious press, the dress - and the snaps of Diana in it - would kick off a long love affair with the princess. 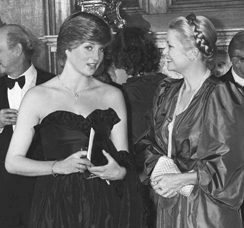 (AP Photo)
"Up until that point, they'd seen her as a floppy-haired puppy," said Christopher Wilson, a seasoned observer who has written extensively on the royals. "And that's the moment Fleet Street fell in love with her.

"It all stretches back to that one picture."

Despite the reaction to her ballgown, Diana liked it enough to ask the Emanuels to take it in when it became too large for her, as she was constantly losing weight. In the months leading up to her wedding, Diana's waist dropped from 26 to 24 inches, and the Emanuels decided it would be easier to just make her a new, smaller version of the dress. Elizabeth Emanuel said she doesn't know what happened to the second version.

The collection up for sale includes sketches, notes, invoices - one shows Diana's mother paid 1,000 guineas for the wedding party's dresses, which was the equivalent of £1,050 - and even the handbag that Elizabeth Emanuel carried to the wedding at St. Paul's Cathedral on July 29, 1981. It still has the smelling salts the designer brought along in case her famous client felt faint. (She didn't, Emanuel said, describing Diana as the epitome of calm.)

"Diana was just fantastic. From the moment we first met her, she was just like a regular client. She was lovely, down-to-earth, very sweet, very calm, very friendly. She made a point of meeting everybody in the work room and she was just so easy to get on with," Emanuel said. "We had so much fun."