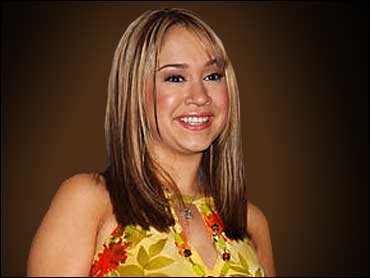 Since the "American Idol" finale almost a month ago, life has been a whirlwind for Diana DeGarmo.

"It's been absolutely crazy, but it's been so much fun. I've had an absolute blast," DeGarmo, who just turned 17 on June 16, tells The Early Show co-anchor Rene Syler. "I've been going from New York, to L.A., to Atlanta, back to my birthday. It's been crazy."

The youngest "American Idol" contestant to ever make it to the top two already has her first single, "Dreams," to her credit. It's scheduled for release on June 29.

And Tuesday, she is opening for LeAnn Rimes' concert that's going to be taped and shown on the Oxygen network. Then she will go on a big tour with the "American Idol" finalists.

"I recommend everyone to come see it," DeGarmo says. "We're going July 14 through Sept. 29. I'm sure we're going to hit a city near where you are."

In the meantime, she sang "Dreams" on the show. The double-A sided "Dreams," with "Don't Cry Out Loud," was originally a top 10 hit for Melissa Manchester in 1979. Clive Davis, who headed Arista Records when the label released Manchester's original, personally selected the song for DeGarmo to sing on the May 18 edition of "American Idol." Davis was the celebrity judge on the show that night, and joined Simon Cowell, Paula Abdul, and Randy Jackson in praise of DeGarmo's performance.

The single also features DeGarmo's version of "I Believe," performed by DeGarmo and Fantasia Barrino on the final night of competition of the series. With the RCA release, DeGarmo joins the ranks of "Idol" finalists with records.