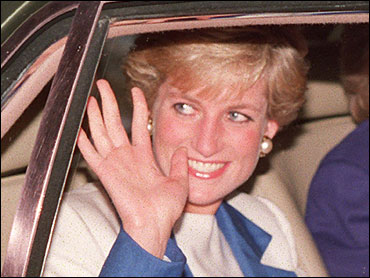 Letter from London is Larry Miller's weekly look at news from across the pond.

If you put the words "Princess Diana Conspiracy" into Google, in a 13th of a second you can chose from about 461,000 results.

That ranks pretty high among conspiracy theories — 61,000 more than for Marilyn Monroe and about half the number for JFK. But then, Diana has only been dead less than 10 years.

Like those others, "The People's Princess" died in her prime. Her face never to age, the pathos of her short life to weigh heavily on her doe-eyed expression, forever frozen in time.

Unanswered questions have fueled the conspiracy theories. Some should have been dealt with immediately after the car crash in a Paris tunnel that killed Diana, her boyfriend and the driver.

A three-year investigation by a former head of Scotland Yard answers most — but not all — the questions in a report released this week.

However, those who believe Diana was killed by the British establishment because she was seen as a royal embarrassment, or worse, probably won't be convinced by an investigation led by an establishment figure called Lord Stevens.

Conspiracy theorists suggest Diana was going to marry Dodi Fayed, the playboy son of Harrod's department store owner Mohammed, and that she was pregnant.

How unseemly for the mother of the heir to the British thrown to bare a Muslim child, the story goes, so she had to be eliminated. Dodi's father has been a main proponent of this theory, never missing an opportunity to accuse the royal family of murder.

Other factors provide the tinder. The white fiat believed struck by Diana's black Mercedes has never been found.

It's been alleged the blood of the chauffeur Henri Paul was switched with that of a suicide victim. We've read that a British secret service motorcycle-riding assassin blinded Paul with a massive flash.

Paul, it should be said, was no mere driver but head of security at the Fayed-owned Ritz Hotel where the couple was staying.

The new investigation tested Paul's blood and found he was three times over the drunk drive limit and had mixed in prescription drugs. A recent test linked his DNA with that of his parents, leaving us with a near-incapacitated driver, going out of control at 100 miles an hour in a narrow tunnel.

The doctor who tried to save Diana says she may have survived had she worn a seat belt. That's the official version.

What about the pregnancy and engagement? Well, British investigators tested traces of Diana's blood in the wrecked car that showed she was not pregnant. While it's true Dodi bought the Princess a ring, Diana told the friend she was just having a fling and was not marrying the guy.

Interestingly, it's been reported U.S. intelligence bugged Princess Diana's phone the night she was killed. That's been denied by the U.S. and while Stevens says he's satisfied the Americans aren't holding back anything of relevance, skeptics might ask, why keep the transcripts secret if there is nothing to hide?

This investigation will convince some it was an accident, but not Mohammed Fayed. He says Stevens was blackmailed by British intelligence to conclude there was no conspiracy or assassination.

For those who buy into the Diana conspiracy, that industry will find a ready audience among those who will never believe Diana was simply in the wrong place at the wrong time with the wrong driver and should have been wearing a seat belt.

Can it be long before Diana knocks JFK into second place in the Google Conspiracy Stakes?