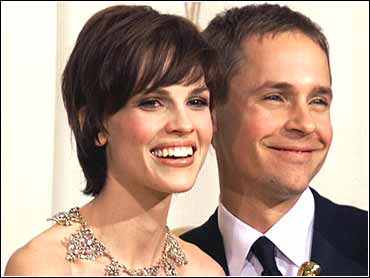 Ah, those jewels that adorn Hollywood royalty on Oscar night! Where do they come from, and how do they wind up on those famous necks, wrists, and ear lobes?

Well, one source is the Diamond Information Center, which acts as a liaison between the stars and the jewelers. Diamond expert Joan Parker, who has been with the information center for 25 years, visited The Saturday Early Show to explain the process and to show some of the Oscar diamonds.

As soon as nominations for the Academy Awards are announced, the information center is mobbed with requests.

Each piece a star chooses is delivered on the day of the awards. It is accompanied by security guards. (The number of guards depends on the value of the diamonds.) Generally, the pieces are returned the next day.

But sometimes, the actresses (or the men in their lives) buy the jewels. When Gwyneth Paltrow won as Best Actress in 1999 (for Shakespeare in Love), her father bought her the necklace she was wearing. In 1995, on the way to the awards ceremony, Nicolas Cage told his wife that if he won Best Actor (for Leaving Las Vegas), he would buy her the diamonds she had on loan. He went home with an Oscar -- and she went home with new jewelry.

Designers make money from their loaners in other ways, too. For example, the necklace that Celine Dion wore in 1997 sold within 24 hours of her walking off stage.

Trends to look for this year:

Also getting into the game are fashion designers who are developing jewelry lines. Parker showed a necklace by Escada and one by Chanel. (Janet Jackson wore the Chanel piece at the American Music Awards.)

And what about the men at the Oscars? Are diamonds only a girl's best friend? Steve Martin, the show's host, has been sent a diamond bow-tie for consideration. Now whether he will wear it or not is another question.