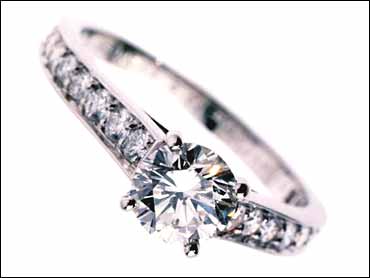 "Diamond" comes from the Greek "adamao": "I tame" or "I subdue." The adjective "adamas" was used to describe the hardest substance known, and eventually became synonymous with diamond.

Knowledge of diamond starts in India, where it was first mined. The word most generally used for diamond in Sanskrit is transliterated as "vajra," "thunderbolt," and "indrayudha," "Indra's weapon." Because Indra is the warrior god from Vedic scriptures, the foundation of Hinduism, the thunderbolt symbol indicates much about the Indian conception of diamond.

Early descriptions of diamond date to the 4th century BC. By then diamond was a valued material. The earliest known reference to diamond is a Sanskrit manuscript by a minister in a northern Indian dynasty. The work is dated from 320-296 BCE.

Small numbers of diamonds began appearing in European regalia and jewelry in the 13th century, set as accent points among pearls in wrought gold. By the 16th century the diamonds became larger and more prominent, in response to the development of diamond faceting, which enhances their brilliance and fire. Diamonds came to dominate small jewels during the 17th century and large ones by the 18th century.

In the 13th Century, Louis IX of France established a law reserving diamonds for the king. This bespeaks the rarity of diamonds and the value conferred on them at that time. Within 100 years diamonds appeared in royal jewelry of both men and women, then among the greater European aristocracy, with the wealthy merchant class showing the occasional diamond by the 17th century.

As more diamonds reached Europe, demand for them increased. The earliest diamond-cutting industry is believed to have been in Venice, a trade capital, starting sometime after 1330. Diamond cutting may have arrived in Paris by the late 14th century. By the late 14th century, the diamond trade route went to Bruges and Paris, and later to Antwerp.

By 1499, the Portuguese navigator Vasco da Gama discovered the sea route to the Orient around the Cape of Good Hope, providing Europeans an end-run around the Arabic impediment to the trade of diamonds coming from India.

In the 18th century the diamond became even more abundant. They were worn principally by women. Substantial quantities of diamonds arrived from South America, making conspicuous display of the gem possible. Diamonds were reserved for evening since it was considered vulgar to parade them by day. Rather than a miscellany of jewels of different types, a matched set of jewelry -- was now worn at all important social events.

Two events near the end of the 19th century helped change the role of diamonds for the next century. First, the discovery in the 1870s of diamond deposits of unprecedented richness in South Africa changed diamond from a rare gem to one potentially available to anyone who could afford it. Second, the French crown jewels, sold in 1887, were consumed by newly wealthy capitalists, particularly in the United States, where a taste and capacity for opulent consumption was burgeoning.

Seen under the blaze of gas and electric lighting, diamond's brilliance showed to greater advantage than colored stones, and so designs incorporated them in far greater numbers than at any time in history.

Before the 1870s diamonds were still rare, and associated with the aristocracy. In 1871, however, world annual production, derived primarily from South Africa, exceeded 1 million carats for the first time. From then on, diamonds would be produced at a prodigious rate.

Simultaneously, the fall of Napoleon III in 1871 left the Third Republic of France with a problematic symbol of monarchy: the crown jewels, largely reset by Empress Eugenie in the style of the great Louis kings. It was decided to auction the bulk, retaining a few key objects for the State.

With French buyers such as Boucheron and Bapst in attendance, Tiffany & Co. of New York bought the major share; 22 lots for $480,000, a sum greater than the combined purchases of the 9 next-largest buyers.

Today diamonds are mined in about 25 countries, on every continent but Europe and Antarctica. However, only a few diamond deposits were known until the 20th century, when scientific understanding and technology extended diamond exploration and mining around the globe. For 1,000 years, starting in roughly the 4th century BC, India was the only source of diamonds.

In 1725, important sources were discovered in Brazil, and in the 1870s major finds in South Africa marked a dramatic increase in the diamond supply. Additional major producers now include several African countries, Siberian Russia, and Australia.

It is a modern misconception that the world's diamonds come primarily from South Africa: diamonds are a worldwide resource. The common characteristic of primary diamond deposits is the ancient terrain that hosts the kimberlite and lamproite pipes that bring diamonds to Earth's surface.

Diamond production has increased enormously in the 20th century. India's maximum production, perhaps 50,000 to 100,000 carats annually in the 16th century, is very small compared to the current production of around 100 million carats.

For the most part, except for major wars and economic recessions, diamond production has been steadily increasing since then, with non-African sources growing in relative proportion. Major production is now dominated by Australia, Botswana, Russia, and Congo Republic (Zaire), but South Africa is still a major producer, in both volume and value.