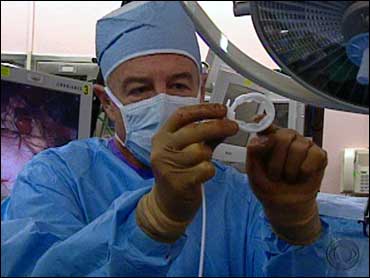 (CBS/AP) Stomach stapling for the not-so-fat? If you have diabetes and are battling a mid-size bulge it might just help.

For years, doctors have noted that obese people who undergo bariatric surgery - stomach stapling and the like - often experience a reversal of their diabetes. Many achieve normal blood sugar and are able to ditch their medications.

Could diabetes sufferers who aren't obese, just a bit overweight, benefit as well?

It's a big issue. According to the American Diabetes Association, 24 million Americans have the disease. The cost of treatment and lost work is $175 billion.

But doctors who want to try expanding the reach of bariatric surgery are swimming against the tide. That's because if you want to get your stomach stapled, you have to meet some pretty strict criteria.

Federal guidelines say surgery candidates must be morbidly obese with a body mass index over 40, or a BMI over 35 plus a weight-related medical problem like diabetes or high blood pressure. Insurers use the cutoffs in deciding whether to pay for the procedure.

Yet Dr. Philip Schauer of the Cleveland Clinic is among those pushing the BMI envelope to see if bariatric surgery can make diabetes go away in people who are overweight, but not fat enough (according to the guidelines), for surgery.

He's recruiting 150 overweight and obese Type 2 diabetics with BMIs between 27 and 43 for a study. Some will have surgery and their progress will be compared to those who manage their diabetes with medicine. The goal is to see which group can achieve complete remission.

Smaller studies have already hinted that stomach stapling and gastric banding - in which an adjustable ring is placed over the top of the stomach to create a small pouch- may work in diabetics who aren't so fat.

Why does it work at all?

Doctors don't exactly know, but there is some evidence that it may not all be due to weight loss. Diabetes happens when the body can't regulate blood sugar, and some researchers think that the rerouting of the digestive tract after the operation affects the gut hormones involved in blood sugar control.

Gastric bypass is major surgery - accompanied by all the possible complications. It's also very expensive if you're not officially obese. And after the surgery, patients must make major lifestyle changes.

The American Diabetes Association said there's not enough evidence to generally recommend surgery for diabetics with a BMI lower than 35 outside of an experiment.

On the other hand, diabetes medication is also expensive. According to the American Diabetes Association, patients spend on average $11,744 a year on meds and treatment. And for some, side effects to the meds are awful.

It seems that no matter what, when it comes to being overweight with diabetes, you may have to pick your poison.