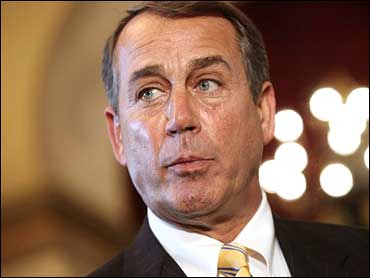 The party's leader in the House of Representatives, Rep. John Boehner, described the report as offensive and demanded that the agency apologize to veterans.

The agency's intelligence assessment, sent to law enforcement officials last week, warns that right-wing extremists could use the bad state of the U.S. economy and the election of the country's first black president to recruit members. (Click here for the full DHS report, in PDF form.)

The assessment also said that returning military veterans who have difficulties assimilating into their home communities could be susceptible to extremist recruiters or might engage in lone acts of violence.

"To characterize men and women returning home after defending our country as potential terrorists is offensive and unacceptable," Boehner said.

David Rehbein, commander of The American Legion, a congressionally chartered veterans group that claims 2.6 million members, wrote to Homeland Security Secretary Janet Napolitano expressing concern with the assessment, which made its way into the mainstream press after conservative bloggers got wind of the analysis.

One such blogger, Michelle Malkin, called the report, "one of the most embarrassingly shoddy pieces of propaganda I'd ever read out of DHS."

Rehbein called the assessment incomplete and said it lacked statistical evidence. He said the 1995 Oklahoma City bombing by military veteran Timothy McVeigh was one instance of a veteran becoming a domestic terrorist.

"To continue to use McVeigh as an example of the stereotypical `disgruntled military veteran' is as unfair as using Osama bin Laden as the sole example of Islam," Rehbein said in the April 13 letter.

Napolitano defended the assessment and others issued by the agency.

"Let me be very clear - we monitor the risks of violent extremism taking root here in the United States," Napolitano said in a statement. "We don't have the luxury of focusing our efforts on one group; we must protect the country from terrorism whether foreign or homegrown, and regardless of the ideology that motivates its violence."

Napolitano said the department respects and honors veterans and that she intends to meet with Rehbein next week after she returns from a tour of the U.S.-Mexico border and meetings in Mexico City.

"The report should have been worded differently, but it made no blanket accusation that every soldier was capable of being a traitor like Benedict Arnold, or every veteran could be a lone wolf, homegrown terrorist like Timothy McVeigh," said Gardner, a Marine veteran from Round Rock, Texas. "It was just an assessment about possibilities that could take place."

Homeland Security says the assessments are part of a series published "to facilitate a greater understanding of the phenomenon of violent radicalization in the United States."

In February, the department issued a report to law enforcers that said left-wing extremist groups were likely to use cyber attacks more often in the next 10 years to further their cause.

In September, the agency highlighted how right-wing extremists over the past five years have used the immigration debate as a recruiting tool.

Between September 2008 and Feb. 5, the agency issued at least four reports, obtained by The Associated Press, on individual extremist groups such as the Moors, Vinlanders Social Club, Volksfront and Hammerskin Nation.

But the references to military veterans in the recent report angered conservatives.

"The department is engaging in political and ideological profiling of people who fought to keep our country safe from terrorism, uphold our nation's immigration laws, and protect our constitutional right to keep and bear arms," said Republican Rep. Gus Bilirakis.

Indiana Rep. Steve Buyer, the ranking Republican on the House Veterans' Affairs Committee, said it was "inconceivable" that the administration would consider military veterans a potential terror threat.

The DHS assessment was made public on the same day that another report, from an organization that has tracked extremist groups for 40 years, found a 50 percent rise in the number of such groups since 2000 - to 926 today.

The Southern Poverty Law Center's Intelligence Report attributed the increase in part to the election of President Obama as the nation's first black president, and to a backlash against Latinos. Another factor: the weak economy.