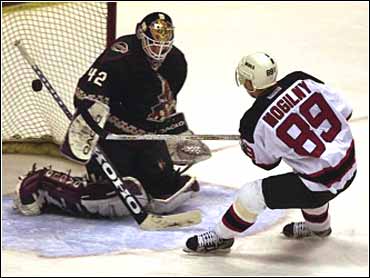 While the New Jersey Devils watch in wonder, Alexander Mogilny is taking his scoring streak in stride.

Mogilny scored twice Wednesday night to help the Devils earn a 5-1 victory over the Phoenix Coyotes. He has 14 goals in the last 13 games.

"My goodness, that guy can score," said Bobby Holik who also had two goals for New Jersey. "It is not even a contest when he gets 1-on-1 with a defenseman. That's what he does best, like me, being a pain in the neck out there."

"What's so great?" Mogilny said when complimented on reaching 20 goals at the midpoint of the season. "I once had 50 goals by the All-Star break. That was great.

"I recall once I scored 30 goals and the writers called it a bad year, so I don't know. I'm happy with the way things are going right now. I know my role and I try to be a shooter."

The only thing going better than Mogilny are the Devils themselves, who are unbeaten in 10 games (7-0-3) - the longest current unbeaten streak in the NHL. The Devils are 16-3-5 in the last 24.

Petr Sykora also had a goal and Sergei Brylin had three assists for New Jersey.

Mika Alatalo had the only goal for the Coyotes, who were unbeaten in three games. Claude Lemieux returned to New Jersey for the first time since he hlped the Devils win the Stanley Cup in June. Lemieux, who signed with Phoenix as a free agent on Dec. 2, was held scoreless.

"This was nice to come back and play here again," Lemieux said. "They have some guys who are hot right now and they took full advantage. We can't play like this and expect to win, not against that team."

Holik, who had not scored in 17 games, finally hit the net 1:17 in. New Jersey applied pressure right from the opening faceoff and it paid off as Holik rifled a shot from the right circle past rookie goalie Robert Esche.

New Jersey broke the game open with three goals in the second period to take a 4-1 lead.

After Holik netted his second goal at 8:21, Mogilny scored the next two. With the teams skating 4-on-4, Mogilny zipped around Phoenix defenseman Keith Carney to beat Esche at 10:07.

Mogilny struck again at 16:27 with a snap shot from the left circle. Sykora padded the Devils lead to 5-1 with a power-play goal at 10:51.