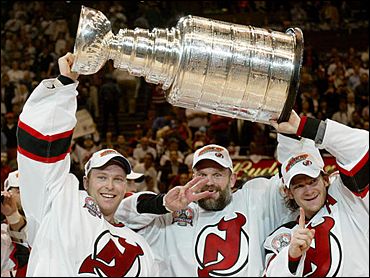 The Devils, riding the greatest home-ice advantage in NHL playoffs history and a goal from one of the unlikeliest Game 7 stars ever, ended the Mighty Ducks' remarkable playoff run and won the Cup with a 3-0 victory Monday night.

Mike Rupp, who hadn't played in the postseason until unexpectedly being called in Game 4, scored the first goal and set up Jeff Friesen for the other two. Friesen scored five goals in the series, all at home.

The Devils swept all four games at home — all with the second period proving decisive — in the first finals since 1965 and only the third in which the home team won every game. The Ducks rallied from 2-0 and 3-2 deficits to force a Game 7 by winning all three games in Anaheim.

"It's been a bumpy ride, with a great deal of adversity," goalie Martin Brodeur said. "We definitely came through at the right time."

And in the right place. The Devils were a record 12-1 at home, allowing only 13 goals. They outscored the Ducks 15-3 in four games in New Jersey, all decided by three goals.

"We feel really at ease playing in our own building. The only reason we won the Stanley Cup is because we were so dominant in our own building," said Brodeur, who turned aside 24 shots in his third shutout of the series — all at home, of course.

The Devils' John Madden credited coach Pat Burns with establishing during training camp the importance of winning win at home; they were 25-11-3-2 at home during the season.

Burns found a home, too; he coached three Original Six teams before finally win the Cup with New Jersey.

"It starts with Pat," Madden said. "Previously our record at home was terrible. But he said were going to compete hard and play hard ... in our building."

And who says there wasn't a triple crown winner this year?

The Devils, despite lacking the huge payroll and plethora of stars that Detroit does, won their third Stanley Cup in nine seasons — matching the Red Wings for the most since the Edmonton Oilers won their fifth Cup in 1990.

"This makes up for that bad time against the Colorado Avalanche," said Devils captain Scott Stevens. The Devils would have had a fourth Cup if they hadn't lost a 3-2 series lead and the Cup to Colorado in 2001.

Brodeur bounced back from his worst game in the playoffs, a 5-2 loss in Game 6 in which he was pulled in the third period, to outduel Anaheim goalie Jean-Sebastien Giguere. Giguere was only the fifth player to win the Conn Smythe trophy as the playoffs MVP while on the losing team and the first since Philadelphia's Ron Hextall in 1987.

Giguere never smiled as he accepted the MVP trophy to the boos of the New Jersey fans and the applause of the Devils players, immediately leaving the ice in tears.

"It's tough to lose like that," Giguere said after receiving his trophy. "It was really tough to see them (the Devils) cheer. ... Like I said, this is not the one you want. You want the big silver one."

Brodeur said Giguere deserved the award and, "I got the one I wanted."

In the end, though, the jig was up for Jiggy and a straight-out-of-Hollywood season for the Ducks, who were trying to match the World Series champion Anaheim Angels by winning a totally unexpected championship seven months apart.

The Ducks had won only one previous playoff series in their 10-year history before upsetting the defending champion Red Wings and top-seeded Dallas Stars in consecutive rounds. After that, they swept Minnesota in the Western Conference finals.

"It was definitely a great run getting to the finals," Paul Kariya said. "We didn't finish the job and we're a little disappointed about that. ... We will be back."

By preventing seventh-seeded Anaheim from becoming the lowest-seeded Stanley Cup winner ever, Rupp — an unknown name even to most Devils fans until a few games ago — wrote his name alongside finals Game 7 stars such as Henri Richard, Ray Bourque and Mark Messier.

"I never would have thought this was possible," Rupp said. "I had a funny feeling. By no means did I think I would get a goal, but I had a good feeling. I was probably as calm as I've been in any NHL game."

Rupp hadn't played since early May and was skating only with the non-active players after practice before being unexpectedly pressed into the lineup by coach Pat Burns in Game 5, with center Joe Nieuwendyk out with an injury.

"I was training hard, but I never thought I would get thrown into the Stanley Cup finals," said Rupp, who has only five goals in 26 career NHL regular season games.

After both goalies enjoyed strong first periods, Rupp scored the pivotal first goal. The Devils are 11-0 when they score first in the playoffs.

Scott Niedermayer's shot from the blue line was deflected by Rupp between Giguere's pads at 2:22 of the second period. Sensing how important the goal was, Giguere angrily pushed the puck out of his net.

Slightly less than 10 minutes after Rupp scored his first playoff goal in only his fourth playoff game, he gathered Niedermayer's rebound and tipped it to Friesen, who scored his fourth goal of the series but first since Game 2.

Friesen, who was traded from the Ducks to the Devils last summer, had five goals in the finals — three as the Devils won each of the first two games 3-0 against the Ducks.

Niedermayer assisted on both goals to win his third Cup with the Devils and deny his brother, Anaheim forward Rob Niedermayer, his first. Before the series, their mother, Carol, said she hoped the Ducks would win so both sons could own the Cup.

"It was tough," Scott Niedermayer said. "I told him I wished he could be with us. He played as well as anybody on the ice."

Stevens, who as the captain was the first to skate with the Cup, handed it to Niedermayer, no doubt aware how difficult it was for the brothers to compete against each other for the same prize.

"I really wanted Rob Niedermayer to have that cup next," Stevens said.

One goal might have been enough on this night, but two probably seemed like 20 goals to Brodeur, who has now won an Olympic gold medal and a Stanley Cup in consecutive years.

Brodeur's big-game experience meant all the difference as he became one of five Devils to win three Cups with the team. Stevens, Ken Daneyko, Sergei Brylin and Niedermayer are the others.

Brodeur thinks the Devils will be back, too, with most of their key players signed for next year.