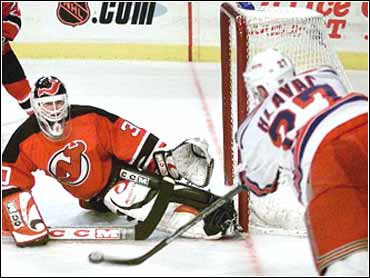 It might take a deal with the Devils for the New York Rangers to beat the Stanley Cup champions.

Brian Rafalski's tying goal with 1:30 left in regulation his second score spoiled Jan Hlavac's three-goal effort for New York as New Jersey earned a 5-5 tie Saturday and extended its unbeaten streak against the Rangers to 21 games.

"When you do so well against one team, I think it's in their head," Devils goalie Martin Brodeur said. "I think they got into a comfort zone when they scored three goals in the first. We really responded well the rest of the game."

Rafalski's goals came on drives from the blue line that got through traffic and past goalie Mike Richter. The second appeared to be tipped on the way in.

"About a minute to go - I don't get a chance to score too many of those," the defenseman said. "Both my goals, there were guys in front and that's key for us."

Hlavac put New York up 5-4 with 5:23 left in the third period, but Rafalski, who also had an assist, scored his sixth goal to force a wild overtime. Rafalski's last goal was 15 games ago against the Rangers on Nov. 29.

"We're all disappointed the win got away," Rangers coach Ron Low said. "We'll live with the point. It could have been better. I know one thing, there's not a guy in there that didn't leave what he had on the table. That's all I care about."

Petr Nedved/a> scored a short-handed goal and added two assists and Theo Fleury had a goal and an assist for the Rangers, who have won once in their last 12 games.

In the overtime, Brodeur's stop on a New York 2-on-1 led to a breakaway by New Jersey's Alexander Mogilny that was denied by Richter with 1:08 left. Fleury was called for slashing and unsportsmanlike conduct during the play.

Mogilny was also sent off then because of an illegal stick but the Devils maintained the advantage because of Fleury's extra minutes.

"I can't be putting us in that position," Fleury said.

Hlavac finished his second career hat trick by collecting a loose puck in the neutral zone and carrying it along the left boards. He beat Ken Sutton twice on his way to the net for his 16th goal of the season.

John Madden scored a short-handed goal, and Mogilny and Jason Arnott also scored for the Devils, who extended their unbeaten streak to nine games (6-0-3).

"They thought they had it wrapped up when they scored that fifth goal," Brodeur said. "The bounces went our way and that's the kind of streak we're on."

Brodeur made 21 saves in his 47th straight start - including the playoffs - against the Rangers.

The Rangers took a 3-1 lead in the first period only to see the Devils tie it before intermission and grab the lead late in the second period on Arnott's eighth goal.

New York tied it 4-4 exactly three minutes later, at 16:41, when Hlavac scored his second goal of the game.

The Rangers started the game aggressively. Sandy McCarthy squared off against New Jersey's Jim McKenzie twice in the first 12 minutes, and the teams combined for 36 penalties in the first period 20 for New York.

"I'm not going to score too many goals," McCarthy said, "so I want to make my physical presence felt out there."

Hlavac gave New York the lead at 5:11 and Nedved made it 2-0 with teammate Adam Graves in the penalty box at 8:33.

Mogilny made it 2-1 at 12:20 of the first with his fourth goal in two games, but Fleury restored the two-goal lead 14 seconds later with his 24th goal.

"We didn't come out the way we'd like, but we were able to battle bac" Rafalski said. "As the game went on we played better and better."

He scored with 2:31 left in the period, and Madden tied it with his second short-handed goal this season 1:07 into the second.