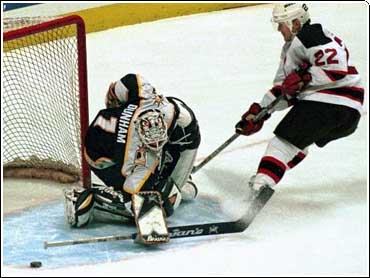 The letdown the New Jersey Devils feared against the Nashville Predators never happened, which is a good reason why they are heading into the All-Star break with the NHL's best record.

Jason Arnott broke a tie with a goal nine seconds into the second period and the Devils defeated Nashville 4-1 Thursday night, 24 hours after an emotional win over the rival New York Rangers.

"It wasn't a pretty win. They played pretty well, a tight game," said Devils captain Scott Stevens, one of team's four players who will be playing in the All-Star game at Toronto. "They didn't give us a whole lot of room out there. But the bottom line is winning after you come off a big game against the Rangers, and that's what we did."

Bobby Holik, Brendan Morrison and Denis Pederson also scored and Chris Terreri made 31 saves in a rare start. The Devils welcomed back coach Robbie Ftorek from a one-game suspension by improving to 33-15-5.

Cliff Ronning, who broke a 14-game goal drought on Wednesday, got his second in as many nights, giving the Predators a 1-0 lead with a shot from the left circle at 5:56 after the opening faceoff.

Holik tied the game 1:42 later, deflecting a power-play shot from the point by defenseman Lyle Odelein past goalie Mike Dunham, who gave up two goals on six shots before being replaced.

The second-fastest goal in Devils' history at the start of a period gave New Jersey a 2-1 lead early in the second period. Arnott won the faceoff to Petr Sykora, who nudged a pass to Patrik Elias. The All-Star forward then sent a cross-ice pass to the corner of the net that Arnott powered past Dunham.

"I don't know whether he just lost it or it was a pass, but I'm going to give him credit and say it was a pass," Arnott said of his 16th goal.

Elias, who was added to the World Team earlier in the day as a replacement for the injured Peter Forsberg, just smiled.

But that's the way things are going for the Devils this year.

Arnott's goal was 1 second shy of the Devils' record shared by Alexander Semak and Kirk Muller, with Semak doing it last in 1993. Randy McKay had the Devils' fastest goal this season, scoring 13 seconds into the third period of against Ottawa.

While the Devils dominated the opening 10 minutes of the second period, they couldn't beat goalie Tomas Vokoun. He replaced Dunham at 2:26 and stopped all 15 shots New Jersey fired at him.

While Terreri didn't face many quality chances in his sixth start of the season, he kept the Devils in front with a great glove while on his belly against Mark Mowers about seven minutes into the period.

"We've battled back from two and three goals down," Predators forward Tom Fitzgerald said. "But New Jersey is a team that just doesn't let you back in the game."

Morrison gave the Devils a cushion by beating Vokoun in close on a nice setup by rookie John Madden at 6:15 for his fourth goal of the season. Pederson scored his third on a rebound with 3:32 to play.