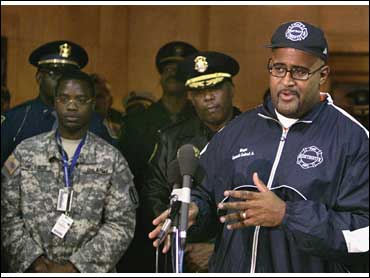 The city that used to burn on the night before Halloween as mischief-makers torched abandoned buildings has largely doused its Devil's Night by mobilizing tens of thousands of citizens and law-enforcement personnel each year to patrol city neighborhoods.

"It's unfortunate of course that we have to do this, but this is the hand we're dealt," said Luther Keith, executive director of ARISE Detroit!, a coalition of community groups hoping to keep Detroit safe from fires and vandalism around Halloween.

At its peak in 1984, 810 fires were reported in Detroit from Oct. 29 to 31, fueled by, among other things, Devil's Night's growing notoriety and the city's large number of abandoned buildings.

That's in part thanks to volunteers and law enforcement officials who patrol neighborhoods and monitor abandoned buildings starting the night of Oct. 29, part of what has been called Angels' Night since the 1990s.

This year, officials worry that the national foreclosure crisis, and a spate of vacant homes left in its wake, could be tempting targets for arsonists. Detroit ranked as the 14th hardest-hit metropolitan area in the third quarter of this year by foreclosure listing service RealtyTrac Inc.

About 35,000 volunteers have signed up with the city for this year's Angels' Night, and about 50,000 people will volunteer, said Daniel Cherrin, a spokesman for Mayor Ken Cockrel Jr. The city also imposes a youth curfew and takes other preventative measures.

"It's a testament to Detroiters that we understand that we have to be proactive," Keith said. "We can't afford complacency by any means."

Personnel from the city's fire and police departments will be joined this year by state and federal agencies, as well as 25 volunteers from the Michigan Army National Guard, some of whom will patrol in uniform.

Richard Smith, 67, has participated in anti-arson patrols and other volunteer activities for more than two decades in northwest Detroit's middle-class Grandmont neighborhood. He said three homes on his block have been abandoned due to foreclosure in the last couple of years.

"At this point, the best that we can hope for is that someone will keep an eye on those homes and report any possible incidents," the retired city elections worker said.

Cockrel said at a Wednesday news conference that the foreclosure crisis's impact in Detroit "means the problem is a bit more acute this year."

The success of Angels' Night in Detroit has inspired a similar program in Saginaw, another Michigan city that has grappled with arson and the resulting negative publicity.

Angels' Night debuted there a year ago with 2,000 volunteers and reduced the number of fires on the nights around Halloween from over 60 in 2006 to 14 last year, said Marcia Rabideau, chairwoman of Saginaw Arson Watch, which organizes the program with the city.

With 3,500 volunteers signed up to help this year, Rabideau says she hopes to further reduce arson. "We're hoping to get to zero, so that's our goal," she said.