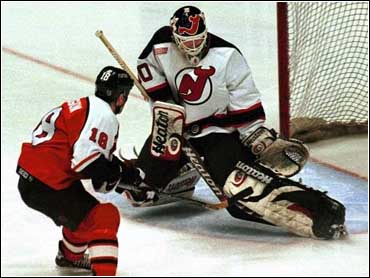 Martin Brodeur wasn't taking credit for his unlikely game-winning goal. In fact, he wasn't even sure it belonged to him.

The New Jersey goalie scored his second career goal and also stopped 19 Philadelphia shots Tuesday night in the Devils' 4-2 victory over the Flyers.

Brodeur was credited with a goal at 9:43 of the third period when Flyers goalie Brian Boucher vacated the net following a delayed-penalty call against Devils defenseman Scott Stevens.

As the Flyers tried to set up for a rush, Sergei Brylin of the Devils knocked the puck loose from Daymond Langkow and it rolled into the empty net. Brodeur, the last Devils player to touch the puck, got credit for the goal.

"I was kind of surprised," Brodeur said. "I was trying to get ready for the power play. The next thing you know they announce your name scoring the goal."

"I didn't really remember what I did for me to be the last one to touch that puck. I really got to take a look at the tape. I really don't remember anything about it."

Brodeur scored his first goal by actually shooting the puck the length of the ice on April 17, 1997 in a playoff game against Montreal.

While a happy Brodeur wasn't sure exactly what happened, Langkow still felt the goal deep in his gut.

"You get that sick feeling in your stomach," Langkow said. "There's nothing you can do about it now. I've just got to try and forget about it."

"I was trying to go to my right. There was a defenseman swinging there. I didn't have control of the puck. I only had one hand on the stick. It's a bad play by me."

Devils coach Robbie Ftorek gave Brylin all the credi for the goal.

"He went in and he pressured the guy," Ftorek said. "The guy coughed it up and it ended up going into his own net which is nice."

Sergei Nemchinov, Patrik Elias and Scott Niedermayer also scored for the Devils, who extended their unbeaten streak to six at 5-0-1.

Langkow and Mark Recchi scored for the Flyers, winless in their last eight visits to the Meadowlands (0-7-1).

After a scoreless first period, the Devils got goals from Nemchinov and Elias to take a 2-1 lead after two.

Nemchinov opened the scoring at 3:52 as he knocked in the rebound of Randy McKay's shot.

Scott Gomez put the puck right on Elias' stick as they hit the Flyers' zone on a 2-on-1 break. Elias drilled a shot past Boucer for a power-play goal, his club-leading 25th score, at 12:13.

Langkow made it 2-1 at 15:33 of the second. Dan McGillis fired a slap shot that Langkow deflected into the air and the puck floated over Brodeur's left shoulder.

After Brodeur's goal made it 3-1, Recchi got the Flyers within one at 11:59. Niedermayer closed out the scoring at 3:32 later.