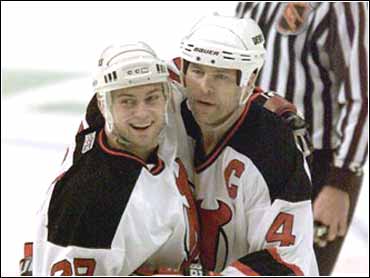 The New Jersey Devils got some revenge in a big way.

Scott Gomez had a goal and two assists and Martin Brodeur stopped 18 shots as the Devils beat the Philadelphia Flyers 7-1 Thursday night in a matchup of the top two teams in the Atlantic Division.

It was New Jersey's first victory over Philadelphia since Game 7 of the Eastern Conference finals last spring. The teams tied 1-1 twice in New Jersey and the Flyers won 6-3 at the First Union Center on Dec. 16.

"We try not to go into a game thinking about it because then you get too emotional," Brodeur said. "It's payback a little."

Sergei Brylin scored twice and Alexander Mogilny got his 23rd goal for the Devils, who took a three-point lead over the Flyers.

Philadelphia has lost two straight after a six-game unbeaten streak. The Flyers hadn't lost by six goals since 1994.

The Devils scored twice in a span of 2:31 less than five minutes into the game. Gomez set up both goals by winning face-offs.

"I'm not going to win every draw, but it was nice to win a few," said Gomez, who ended a 21-game goal-scoring drought with a third-period goal.

Scott Stevens gave the Devils a 1-0 lead on a blast from the point that appeared to deflect off Flyers forward Rick Tocchet just 1:44 into the first.

Mogilny made it 2-0 minutes later with a slap shot that sailed over goaltender a href="http://www.sportsline.com/u/hockey/nhl/players/204471.htm" target="external">Roman Cechmanek's glove. Cechmanek, named to the World All-Star team on Wednesday, has lost two straight after going undefeated in his previous 12 starts.

He stopped just 16 of 21 shots and was pulled for Brian Boucher after two periods.

"They were just ready to play from the beginning and we weren't," Tocchet said. "The ball just rolled for lack of effort or whatever."

Eric Desjardins scored for the Flyers, getting his eighth goal 6:22 into the third period.

"They're a great hockey team, but we didn't equal their effort even remotely. We weren't even close," Flyers forward Mark Recchi said. "A lot of the mistakes we made were just losing battles, which is something we don't do very often."

Brodeur, unbeaten in his last 11 games (7-0-4), made a few tough saves in the second. He stopped Keith Primeau on a backhander in front of the net midway through the period and later made two saves while sitting down with his legs sprawled out together.

Jason Arnott gave New Jersey a 3-0 lead midway through the first, tipping in a crossing pass from Stevens. Jay Pandolfo and Brylin put it away with goals in the second period. Brylin added a goal late in the third.

"What I like most about this team is when they have a challenge like this, they have such great character and they do respond most of the time," Devils coach Larry Robinson said.

The loudest cheers of the night came when Flyers center P.J. Stock and Devils forward Turner Stevenson squared off midway through the first. Several punches were thrown in a short span few landed. Stock got into another fight against Colin White in the third period.