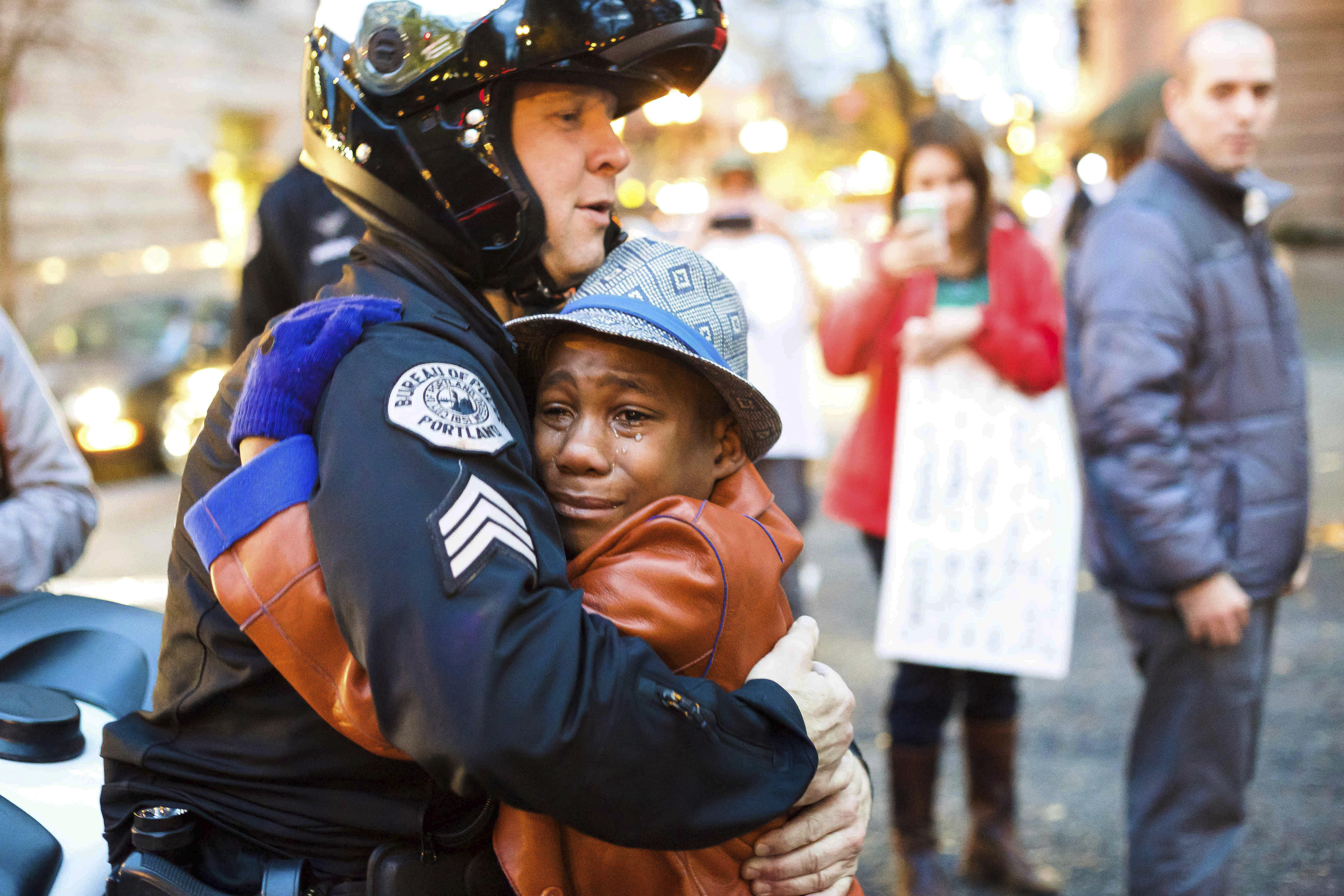 WOODLAND, Wash. -- The two women and their six adopted children traveled to festivals and events, offering free hugs and promoting unity, friends said. They raised animals and grew vegetables and last year moved onto a piece of land in rural southwest Washington, a dream of theirs.

The Hart Tribe, as they were known, also took spontaneous road trips to hike or camp, and friends believe they may have been on one of those adventures when their SUV plunged off a scenic California highway.

"We know that an entire family vanished and perished during this tragedy," said Mendocino County Sheriff Tom Allman on Wednesday as he appealed for help retracing where the family had been before the vehicle was found Monday.

The family gained attention after Devonte Hart, who was 12 at the time, was photographed during a 2014 protest in Portland, Oregon, over a grand jury's decision not to indict a police officer in the shooting of a black man, Michael Brown, in Ferguson, Missouri. The boy, holding a "Free Hugs" sign, stood crying. A Portland officer saw his sign and asked if he could have a hug, and an emotional Hart embraced him in a picture that was widely shared.

Portland photographer Johnny Nguyen captured the moment and knew he caught more than a hug. "From a photographer standpoint, you look at the scene. It's powerful. A white American cop hugging a black American boy," CBS Portland, Oregon affiliate KOIN-TV quotes him as saying.

But neighbors said they saw signs that caused them to worry about how the homeschooled children were being cared for.

The California Highway Patrol has not determined why the vehicle went off an ocean overlook on a rugged part of coastline. A specialized team of accident investigators was trying to figure that out, Allman said.

"We have no evidence and no reason to believe that this was an intentional act," he said, adding that the scene was confusing because "there were no skid marks, there were no brake marks" at the roadside turnout where the vehicle went over.

Authorities believe six children were in the vehicle with their parents, though three siblings haven't been found.

"This is a tragic accident of a magnitude that cannot be measured," said Zippy Lomax, a photographer who knew the Harts.

"They were really radiant, warm, adventurous inspiring people. They were always on some grand adventure, and the kids were living this life that was kind of like this dream," Lomax told The Associated Press. "The family was this very self-supporting unit that was impossible to miss. When they showed up to an event, they made an impression. They shattered a lot of norms and they did not shy away from controversy or adversity."

The Harts, who went to events such as rallies for presidential candidate Bernie Sanders, often showed up in matching T-shirts.

The Harts moved to Woodland, Washington, a small city outside Portland, Oregon, in the spring of last year, partly overwhelmed by the media coverage. The multi-racial family also received death threats, Ribner said.

Next-door neighbors Bruce and Dana DeKalb said they called child services Friday because they were concerned about Devonte Hart, who they said had been coming over to their house in the past week asking for food.

Dana DeKalb said the boy told her his parents "weren't feeding them" and were "punishing them by withholding food." He came over almost every day for a week, and asked her to leave food in a box by the fence for him, she said.

Washington state child protective services opened an investigation Friday and tried to make contact with the family three times since Friday, but weren't able to reach them, said Norah West, a spokeswoman with the state Department of Social and Health Services. The agency had no prior history with the family, she said.

The DeKalbs also recounted that three months after the family moved into the home on 2 acres with a fenced pasture in May 2017, one of the girls rang their doorbell at 1:30 a.m.

She "was at our door in a blanket saying we needed to protect her," Bruce DeKalb said. "She said that they were abusing her."

In 2011, Sarah Hart pleaded guilty to a domestic assault charge in Minnesota. Her plea led to the dismissal of a charge of malicious punishment of a child, online court records say.

Max Ribner, who has known the family since 2012, said allegations from neighbors don't square with what he knows about the Harts.

"They are beautiful examples of opening arms to strangers, helping youth, supporting racial equality," Ribner, who lives in Portland, told the AP. "They brought so much joy to the world. They represented a legacy of love."

Bill Groener, 67, was a next-door neighbor of the Harts when they lived in West Linn, Oregon, and said the kids stayed indoors most of the time. He said the family didn't eat sugar, raised their own vegetables, had animals and went on camping trips.

"There was enough positive there to kind of counteract the feeling that something maybe wasn't quite right," Groener said.