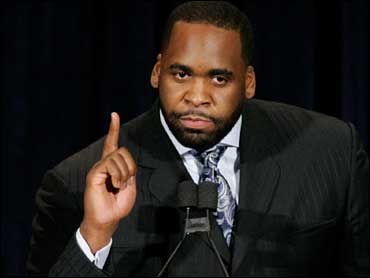 Mayor Kwame Kilpatrick lashed out at his opponents and the news media Tuesday night, accusing them of showing a "lynch mob mentality" in the aftermath of the scandal over his exchange of sexually explicit text messages with a former top aide.

It happened as he finished reading the written text released before his State of the City address, which had only a brief allusion to the text-message controversy.

The case has led to a criminal probe of whether Kilpatrick lied under oath when he denied the affair with former Chief of Staff Christine Beatty, revealed in numerous text messages.

Kilpatrick, who is black, said he and his family have been subjected to racial slurs, as well as threats.

"In the past three days, I've received more death threats than I have in my entire administration," he said. "I've heard these words before, but I've never heard them said about my wife and children," he continued, his voice rising as he wagged his fingers and gestured with his arms.

"I don't believe that a Nielsen rating is worth the life of my children or your children. This unethical, illegal, lynch mob mentality has to stop."

The angry tone was a sharp contrast to his earlier remarks in what was Kilpatrick's seventh State of the City address Tuesday to what he called a "transformed Detroit."

During the 65-minute address delivered to about 1,500 people, he promoted an economic stimulus package, promised improved public safety and the creation of new jobs.

"In the daily press of events, in the midst of foreclosures, joblessness, Iraq and Afghanistan, presidential politics, hatred and racism, and even the Kwame Kilpatrick roller coaster ride, sometimes we may not see our own time for what it truly is," Kilpatrick said in prepared remarks. "Tonight, we are at the dawn of a new, transformed Detroit."

Although violent crime has dropped, the number of homicides in Detroit in 2007 - 494 - was about the same as that in Los Angeles, even though the L.A. population is four times larger than Detroit's, reports the Detroit Free Press.

Four members of the nine-member Detroit City Council took their customary seats behind him on the stage. Three chose to sit in the audience, and two others did not attend.

"I represent the people and I knew this was the right place to be," said Councilwoman Alberta Tinsley-Talabi, one of the four on the stage.

Wayne County prosecutor Kym Worthy says she will announce whether to bring perjury charges against Detroit Mayor Kwame Kilpatrick and his former top aide sometime during the week of March 24.

Worthy announced her investigation on Jan. 25 after the Detroit Free Press reported on sexually explicit text messages left on Beatty's city-issued pager in 2002 and 2003.

The City Council is expected to consider a resolution next week calling for the mayor to resign.

Kilpatrick again promised not to resign, citing the fighting spirit of residents in the face of 15 percent unemployment, reports the Free Press.

Instead, Kilpatrick called for city leaders to work together.

"President Cockrel, we have much more serious issues affecting our city than whether we attend a speech," Kilpatrick said, addressing Council President Ken Cockrel Jr.

Cockrel chose to sit in the audience. He has been critical of Kilpatrick's role in the text-messaging scandal and a Kilpatrick-approved confidential agreement settling an $8.4 million whistle-blowers' lawsuit brought by three former police officers.

Cockrel would complete the remainder of Kilpatrick's second term in office if the mayor is forced to leave office. He was unsure why Kilpatrick chose to publicly single him out for criticism Tuesday.

"My door is always open. He has my number," Cockrel said following the address. "It was inappropriate, but I have bigger fish to fry. I think we all do."

He and Councilwoman Sheila Cockrel stopped short of saying Kilpatrick played the race card at the end of his address.

"The mayor is under a lot of stress and it's telling," Sheila Cockrel said. "Anyone can certainly appreciate what the impact has been on him and his family."

But the situation Kilpatrick finds himself in is due to choices he made, she added.

"I'm not surprised the mayor has a hard time taking responsibility for his actions," Sheila Cockrel said.

New mayoral Chief of Staff Kandia Milton said Kilpatrick's speech was simply about working with the City Council on issues impacting the city.

"It's about action for the mayor," Milton said. "What you heard was passion, and the mayor has a passion for moving the city forward."

Kilpatrick said future mayors "will remember this as a time when we thought not only about us, but about the future - a time that we put aside divisions and found a new hour of healing and hopefulness in which we joined together to transform the city that we all love."

Kilpatrick and Beatty denied under oath during a whistle-blowers' trial last summer that they had a romantic relationship. The text messagestext from 2002 and 2003, released by the Detroit Free Press in January, contradict those statements, leading to a scandal that has embroiled the mayor's office and forced Beatty to step down.

The lawsuit, which eventually cost taxpayers $8.4 million, was filed by two former Detroit police officers who said they were fired or forced to resign for investigating claims that Kilpatrick used his security unit to cover up extramarital affairs.

Before the speech began, about 60 members of Detroit municipal unions picketed outside, urging his resignation or ouster.

They carried signs with messages that included, "fire the mayor," "layoff Kilpatrick now" and "Kwame must go." The protesters cited the text message scandal, as well as public worker layoffs.

The bulk of Kilpatrick's 15-page address focused on the future of the city, not his personal problems. Among the proposals he introduced is a plan for a public works/economic stimulus package.

The city hopes to sell between $300 million and $330 million in bonds to pay for improvements to police, fire, recreation and other city departments, and continued demolition of vacant structures. Plans are to go to the bond market in May if it's approved by the City Council and bond rating agencies.

About $29 million a year from Detroit's casino wagering tax revenues would be used to pay off the bonds. The wagering taxes this year are estimated at $197 million, Kilpatrick said.

"By taking a small portion of this relatively new tax and investing it in our future we will shore up our infrastructure and have a tremendous impact throughout this city," he said. "The deferred maintenance of our police stations, fire stations, rec centers, crumbling streets and other crumbling facilities can no longer be addressed in a piecemeal way. Let's get together. Let's get it done."

"We're hopeful and optimistic the City Council will go for it," Adams told The Associated Press. "It brings work to the city. We'll be hiring contractors and architects dedicated and committed to making sure Detroiters are employed."

Kilpatrick's plan calls for building a new police district headquarters on the city's east side and construction of two new fire stations.

Police Chief Ella Bully-Cummings also has been directed to start a recruiting plan to hire more than 300 officers this year. Kilpatrick also wants the process to enter the Police Academy to be shortened from as long as a year to 13 weeks.

Kilpatrick addressed Detroit's improved bond rating, cost-saving efforts that include a reduced city payroll and changes in health care benefits to employees, and continued development of downtown and the city's riverfront.