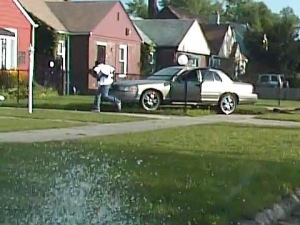 Ferndale police say they attempted to pull over Reed, 23, who was driving Wednesday evening in a stolen Crown Victoria. They say Reed accelerated after bringing the car to a stop at an intersection, and sped through Detroit side streets to escape officers.

Once Reed lost control and crashed the car, police say he ran from the vehicle carrying a baby boy in his arms. Realizing he could run faster without the baby, Reed then handed off the boy to a woman standing in a yard and continued running from police, CBS Detroit reported.

Eventually, Reed was caught by officers while running through residential yards. The 21-month-old was recovered from the woman and brought to the police station where he was examined by police and then turned over to his mother, CBS Detroit reports.

Reed reportedly is not the father of the child but was babysitting him when the incident occurred. Reed's criminal history dates back to 2007 with a conviction for fleeing and eluding, and prior convictions for receiving and concealing stolen vehicles, for which he is currently on parole.