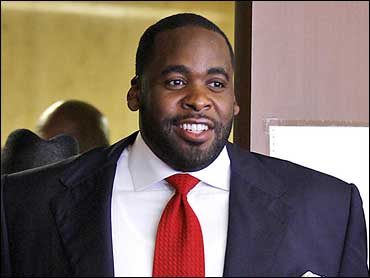 A jury ruled in favor of two former Detroit police officers Tuesday, awarding them $6.5 million in a whistleblower lawsuit that churned out allegations of misdeeds by the mayor's staff and extramarital affairs by the mayor himself.

Gary Brown and Harold Nelthrope had sued the mayor and the city, saying city officials made them suffer after they raised questions about alleged wrongdoing within Mayor Kwame Kilpatrick's security unit.

The Wayne County Circuit Court jury found after a 15-day trial that Kilpatrick and the city had violated the state's Whistleblower Protection Act in the case.

"I'm absolutely blown away at this decision," said Kilpatrick, adding that the city would appeal. "I know Detroiters are too."

Brown said he's happy with the way it turned out. "I'm glad I had an opportunity to tell my story," he said.

Brown claimed he was fired in 2003 because he was looking into allegations of drunken-driving accidents, falsified overtime records and a possible cover-up of incidents involving members of the security unit. He said he was investigating claims from two former mayoral bodyguards that the mayor used his bodyguards to facilitate and cover up extramarital affairs.

"The verdict was more reflective of improper information that went into this trial," said Kilpatrick lawyer Sam McCargo. "It was two cases in one. A morality trial was added to this employment case."

Nelthrope sued after Kilpatrick's administration released a confidential police memo naming him as a source of allegations of misconduct by other bodyguards. Nelthrope said he was transferred out of the security detail and couldn't return to work out of fear for his safety.

Nelthrope has described escorting the mayor to trysts with Christine Beatty, Kilpatrick's chief of staff, and other women.

Kilpatrick, a married father of three, and Beatty have both denied the allegations in court.

Kilpatrick and his attorneys have said the mayor decided to remove Brown as deputy chief in charge of internal affairs came because he lost professional confidence in the man's abilities.

Defense attorneys also maintained that Nelthrope received a disability pension and Brown was demoted - not dismissed - and received a full-service retirement.

The jurors awarded $3.6 million to Brown and $2.9 million to Nelthrope.

"I'm just glad to have my reputation back," Nelthrope told CBS Detroit.

Judge Michael Callahan instructed jurors before they began deliberating Tuesday that the state's Whistleblower Protection Act is designed to protect employees who report or are about to report suspected violations of rules, laws or regulations by their employer or a co-worker. He said the protection only applies to employees who have a "reasonable belief" of violations.