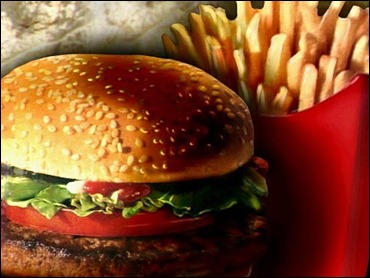 Faced with a $300 million budget hole, Mayor Kwame Kilpatrick is hoping people in this already heavily taxed city won't mind forking over a few extra cents for their Big Macs and Whoppers.

Kilpatrick wants to ask Detroit voters to approve a 2 percent fast-food tax - on top of the 6 percent state sales tax on restaurant meals. The mayor says consumers will barely notice the extra cents at the cash register, but critics say the tax would unfairly burden the poor and hamper economic development.

"Just tell him we're going to go to Bloomfield Hills to McDonald's if he puts a tax on it," said 18-year-old Ebony Ellis, referring to an affluent Detroit suburb, as she and four friends ate at a Golden Arches in Detroit. The high school classmates eat at McDonald's every day after school because their schedule doesn't leave them time for lunch.

Other cities and states have special taxes on prepared food, and some have tried "snack taxes." In New York, Assemblyman Felix Ortiz has proposed a 1 percent tax on junk food, video games and TV commercials to fund anti-obesity programs.

But if approved, the Detroit tax would be the country's first to target fast-food outlets, the National Restaurant Association said. The tax would apply to anything sold at a fast-food restaurant - even salads.

Opponents have been quick to call it a "fat tax" in this city dubbed the nation's fattest in 2004 by Men's Health magazine. Detroit fell to No. 3 for 2005.

City officials say the proposal, part of the draft budget Kilpatrick presented to the City Council last month, is more about Detroit's financial health than anything else.

Although the tax would not come close to fixing Detroit's financial problems - officials predict it would bring in $17 million in the next fiscal year - every dollar counts in a city already bracing for mass layoffs and service cuts.

Enacting the tax would likely require a change in state law, potentially a tough sell in the Republican-controlled Legislature. The tax also would require the approval of Detroit voters.

Young people and senior citizens are big consumers of fast food and would bear an unfair share of the tax's burden, some critics contend.

The restaurant industry says the idea is also unfair to businesses.

"We think it's extremely counterproductive to say to those people who have provided jobs, who have provided growth, 'We're going to levy on you a special tax that we don't levy on anyone else,"' said Andy Deloney of the Michigan Restaurant Association.

But Kilpatrick insists an additional 2 percent - a nickel on a $2.50 Big Mac - would have little effect on the pocketbooks of the average resident or the competitiveness of Detroit eateries.

And the fact is, there aren't many options.

"With Detroit, you're kind of grasping at straws because the tax base is so tapped into," Wassmer said.

The city currently has five major revenue streams: state revenue sharing, an income tax, property taxes, a tax on its three casinos and a utility tax.

Michigan law limits Detroit's ability to raise income and property taxes, and high taxes are already cited as a major reason people and businesses have fled the city, further depleting the tax base.

In a study by the District of Columbia comparing Washington and the biggest cities in each state, Detroit in 2003 had the 10th-highest tax burden for a family of four with an income of $75,000. State and local taxes combined totaled 11 percent, according to the study.

An overall meals tax not limited to fast food is out, Deputy Mayor Anthony Adams said. The mayor likes to boast that 22 new restaurants have opened downtown in the last three years. A tax on all restaurants might hamper this fledgling development, while the city's fast-food market is "pretty mature," Adams said.

And just how is "fast food" defined? Besides the obvious chains like Wendy's and White Castle, officials have mentioned takeout pizza places and Detroit's ubiquitous chili dog restaurants known as Coney Islands. It's uncertain, however, where Starbucks or the corner deli would fall.

The administration says it is still working on a definition.