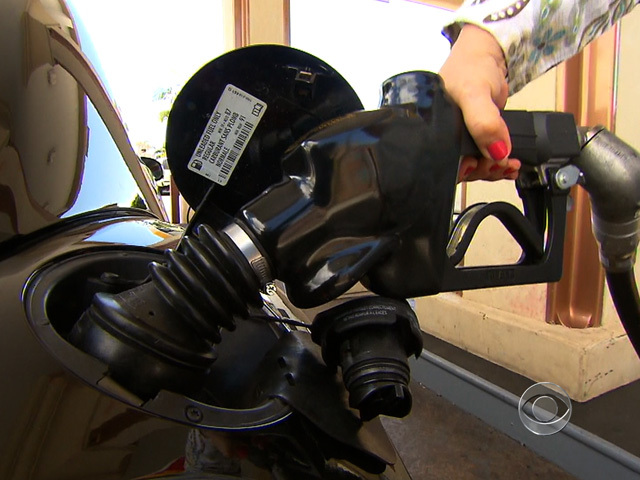 The folks at AAA expect nearly 92 million Americans to hit the road for the holidays -- a slight increase from a year ago. On average, they'll pay $3.21 for a gallon of regular gas -- up 22 cents from last year.

Fuel prices continue to rise, even though America has more gasoline and diesel fuel than it can use. CBS News' Bill Whitaker explains why.

L.A. small businessman Peter Adeli had a good idea: keep shipping costs down by loading many small shipments under one big truck. But now he's being hit not by the recession, but high fuel costs. His trucks run on diesel.

He can't afford to hire more workers and expand his business. This year the average American household will spend a record $4,155 on gasoline. Adeli says he'll spend about $98,000 on fuel.

"I can't understand why the prices increased so much," he said, "even though the national economy and business overall have not picked up."

Yet for the first time in 62 years, the U.S. will export more refined petroleum products -- gasoline and diesel -- than it imports.

"It's preposterous," said Adeli. "It's ridiculous."

In the first nine months of this year, the U.S. exported a net 64 million barrels of gas and diesel -- enough to run America's engines for a week. With the U.S. economy in the doldrums, we're using less fuel. Gasoline, and especially diesel from American refineries, is following demand -- flowing to growing economies in Central and South America.

"Those exports should be staying here in America, keeping our prices low," Adeli argued.

It's unlikely to get better for Adeli in 2012. Gasoline and diesel are expected to stay above $3 a gallon.