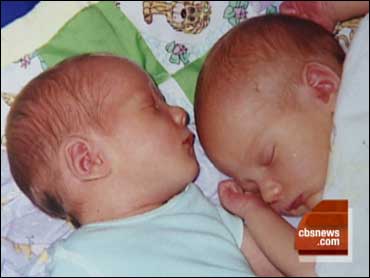 For years, reproductive specialists have been helping people become parents, even enabling them to choose the sex of their baby.

If you could design your baby's features, would you? According to L.A.'s Fertility Institute, prospective parents can select eye color, hair color and more.

The technology is called pre-implantation genetic diagnosis or PGD. It was created to screen for disease, then used for gender selection. Now this clinic plans to allow parents to select physical traits.

Dr. Jeffrey Steinberg is a pioneer in in-vitro fertilization.

"I think it's very important that we not bury our head in the sand and pretend these advances are not happening," Dr. Steinberg said.

Kirsten and Matt Landon used his clinic to select the sex of their daughter. Choosing other genetic traits intrigues them.

"I would have considered trait selection as an option, but not necessarily have gone with it," Matt Landon said.

A recent U.S. survey suggests most people support the notion of building a better baby when it comes to eliminating serious diseases. But Dr. Steinberg says using technology for cosmetic reasons shouldn't scare people away.

"But is that a good thing?" Early Show co-anchor Maggie Rodriguez asked Dr. Arthur Caplan, Ph.D, director of the Center for Bioethics at the University of Pennsylvania.

"Let me quote Dr. Steinberg. He just said he predicts we will have determined sex with 100 percent accuracy and eye color with 80 percent accuracy in the next year. Does that give you pause at all?" Rodriguez asked.

"It does. I think he's wrong. I don't think we're going to get to eye color and hair color and freckles for a couple more years. But he's right in principle. We're headed that way. It is going to be possible to pick traits, not because of diseases or avoiding dysfunction, but because somebody has a taste for a particular child or a preference for a particular child," Dr. Caplan said.

"He says that if it is available, why not offer it to his patients? He says he has the obligation as a doctor to do so. Do you agree with that?" Rodriguez asked.

"I disagree completely. There are really three things to think about. One is, when you move away from diseases, who's to say what's the better trait? Is it better to be red-headed than it is to be brown-haired? Is it better to have freckles or not? Those sorts of things are subjective and in some ways driven by our culture," Caplan said.

"Secondly, you're going to have the rich using these technologies, and that's going to advantage them further. It's not going to be something the poor get to do. Lastly, you've got a problem here, why are doctors in this business at all? He said (Dr. Jeff Steinberg), 'I have to serve my patients,' but is this just a cash business where you'd say, you know, 'I want a child with short arms. I want a kid with athletic ability.' Okay. Well, we'll do that. Is everything and anything for sale at the fertility clinic?" Dr. Caplan asked.

The case of Nadya Suleman, who had octuplets, has raised so many debates like this. The doctor who implanted six embryos is being criticized. A lot of people say there should be a law prohibiting that, Rodriguez pointed out.

"Do you think there should be laws prohibiting this?" she asked.

"Absolutely. And the time to start this discussion is right now. For example, I don't think you should get any of these traits offered to you without some counseling so you can think about, is that important to me? Is this really going to make that much difference?" Caplan said.

This can lead to false expectations on children, he explained. The parents may pick a child to be smart, and he or she doesn't succeed, then they become upset because they invested money and didn't get what they want.

"We need more oversight of this industry, and I think this will turn out to be one of the biggest issues in the next 10, 15 years, the extent to which we design our babies and who's going to be able to call the shots, if you will, on whether the technology gets used to do it," Caplan said.