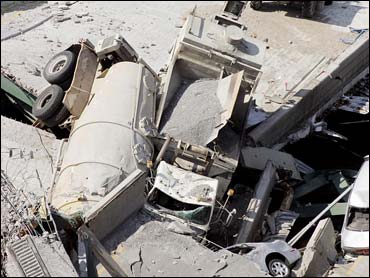 Undersized gusset plates in the Interstate 35-W bridge in Minneapolis were "the critical factor" in the bridge collapse last year that killed 13 people and injured 100, the National Transportation Safety Board said Tuesday.

Chairman Mark Rosenker said the plates, which connected steel beams, were roughly half the thickness they should have been because of a design error. Investigators found 16 fractured gusset plates from the bridge's center span, he said.

The Minneapolis bridge was a steel-deck truss bridge that opened in 1967. Rosenker said it wasn't clear how the design flaw made it into the bridge because investigators couldn't find the design calculations.

Once they made it into the completed bridge, he said, there was little chance they would be noticed by inspectors.

There are 465 similar bridges in the U.S. Investigators don't expect to find the same design flaw, but said today, those bridges should be thoroughly checked before weight or capacity is increased, reports CBS News' Ben Tracy.

The Minneapolis bridge was deemed "structurally deficient" by the federal government as far back as 1990, and the state's maintenance of the structure has been questioned. But Rosenker said the NTSB investigation has found no evidence that cracking, corrosion or other wear "played any role in the collapse of the bridge."

Investigators also found no flaws in the steel and concrete material used in the bridge.

In his update Tuesday, Rosenker also noted structural weight had been added to the bridge in two major renovations, as well as construction materials that were on the bridge the day it collapsed as part of a resurfacing project.

The investigation is now focusing on whether the heavy construction equipment on the bridge was the extra weight that snapped those already weak plates, Tracy reports.

The findings are consistent with what the NTSB said about a week after the Aug. 1 collapse, in which the bridge plunged into the Mississippi River. At the time, the NTSB said it had found issues with the collapsed bridge's gusset plates, but expected a full investigation to take more than a year.

Transportation Secretary Mary Peters was expected to issue an advisory urging states to check the gusset plates when modifications are made to a bridge - such as changes to the weight of the bridge or adding a guardrail, said a federal official with knowledge of the plans. The official spoke on condition of anonymity because Peters had not yet made the announcement.

Currently, such calculations are done for the entire bridge, but not down to the gusset plates, the official said.

Last August, Peters advised states to consider the additional stress placed on bridges during construction projects. An 18-person crew was working on the bridge when it collapsed.

Nearly three months later, she told a gathering in Washington of a "working theory" of a poorly designed gusset plate and a heavy load of construction materials.

Meanwhile, state lawmakers announced plans last month to spend up to $500,000 to hire legal counsel to aid in a legislative inquiry into the collapse.

Late last year, President Bush signed a massive spending bill which included $195 million to help replace the bridge. That came on top of the $178.5 million the federal government has already given Minnesota for the project.

The bridge was originally designed by Sverdrup & Parcel, a company acquired in 1999 by Jacobs Engineering Group Inc. of Pasadena, Calif. A message left by The Associated Press with Jacobs wasn't immediately returned.