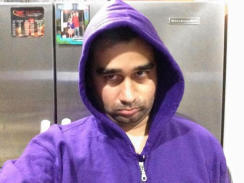 (CBS) SOUTH MIAMI, Fla. - Newly released surveillance video shows Derek Medina, the Miami man who allegedly posted a picture of his dead wife on Facebook along with an alleged confession to her murder, walking into a police station to turn himself in, CBS Miami reports.

The video shows the 31-year-old Medina walking into the police station Thursday with his father behind him. Police said in the arrest affidavit that Medina never called 911, only turning himself in to police after going to see family and confessing.

When officers later responded to Medina's South Miami home, they found Jennifer Alfonso's body inside, as well as her 10-year-old daughter, who was unharmed.

Medina was charged with first-degree murder and ordered held without bond at his arraignment Friday.

According to CBS Miami, Medina appeared in court wearing a black protective vest reserved for psychiatric inmates and those on suicide watch.

Medina's case captured national attention when he posted the following public confession to the alleged murder on his Facebook page, along with a gruesome photo at 11:11 a.m. Thursday:

The photo showed what was apparently Alfonso's body, slumped on the floor.

Jose Alfonso told the station his daughter and Medina had a rocky relationship, getting married and divorced in the span of a couple years.

Medina can be found in multiple videos on YouTube and Amazon, where he sells his e-book titled "How I saved someone's life and marriage and family problems thru communication" in which a character saves his marriage after getting divorced and remarried to the same person, the station reports.

"It's like self-promoting what he's always done you know. To put my daughter nationwide on Facebook that's unbelievable, unbelievable," said Alfonso.

Derek Medina Sr., the suspect's father, told CBS Miami his son is unfairly being made "into an animal." He believes his son was simply defending himself, according to the station.

"He was scared of her all his life, all the relationship, because he always reported to me that he would get beaten by her," said Medina Sr. "She pushed him to the point of insanity."

According to the affidavit, the 6-foot-2, 200-pound Derek Medina said the couple became involved in a heated argument in an upstairs bedroom when he armed himself with a gun and pointed it at her. He said Alfonso left the bedroom, returning later to say she was leaving him. He says he went downstairs and confronted her in the kitchen, when she began punching him. He claims he went back upstairs to get his gun and confronted her again, at which time she grabbed a knife. Medina said he was able to disarm her and put the knife in a drawer, but that when she began punching him again, he shot her several times, the affidavit says.

Amanda Cooper, Alfonso's boss, told the station that Alfonso would often show up to work at Denny's with "scratches and bruises."

Cooper claims she told her friend and co-worker, "Don't go back to him."