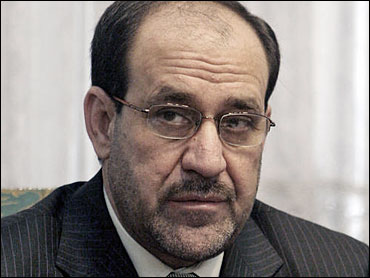 A German magazine which published an interview with Iraqi Prime Minister Nouri al-Maliki stating his support for presidential candidate Barack Obama's proposed 16-month timetable for withdrawing U.S. troops from Iraq is standing by its interview, despite statements issued by an al-Maliki spokesman claiming he was "mistranslated."

Ali al-Dabbagh, the chief spokesman for al-Maliki, said in a statement Sunday that the prime minister's comments were "not conveyed accurately" by Der Spiegel.

Al-Dabbagh said al-Maliki did not endorse a specific timetable but instead discussed "an Iraqi vision" of U.S. troop withdrawals based on negotiations with Washington and "in the light of the continuing positive developments on the ground."

He added that Maliki's comments has been "misunderstood and mistranslated," without detailing which parts were affected.

The Iraqi spokesman's statement was released not by the Iraqi government but by the U.S. military's Central Command press office in Baghdad.

The Der Spiegel article, released Saturday, quoted al-Maliki as giving apparent backing to the withdrawal plans discussed by Obama - the Illinois senator and likely Democratic nominee who has pledged to withdraw combat troops from Iraq within 16 months if he is elected.

"That, we think, would be the right timeframe for a withdrawal, with the possibility of slight changes," al-Maliki was quoted as saying. "Those who operate on the premise of short time periods in Iraq today are being more realistic. Artificially prolonging the tenure of U.S. troops in Iraq would cause problems."

Asked when U.S. forces would leave Iraq, he responded, "as soon as possible, as far as we're concerned."

In the interview, al-Maliki said he was not seeking to endorse Obama.

Today Der Spiegel said it was standing by the accuracy of its interview.

"A Baghdad government spokesman, Ali al-Dabbagh, said in a statement that SPIEGEL had 'misunderstood and mistranslated' the Iraqi prime minister, but didn't point to where the misunderstanding or mistranslation might have occurred," the magazine said, which also noted that several media organizations, including CBS, had pointed out the confusion or tepidness of the spokesman's rebuttal.

"SPIEGEL sticks to its version of the conversation," it said.

Sadiq al-Rikabi, an adviser to al-Maliki, said later that Iraqi officials do not intend to be "part of the electoral campaign in the United States."

"We will deal with any administration that comes to power," he said.

White House spokesman Scott Stanzel said Saturday: "In the interview, the Prime Minister made clear that any decision will be based on continuing positive developments - as he and the president both did in their joint statement yesterday. It is our shared view that should the recent security gains continue, we will be able to meet our joint aspirational time horizons."

On Friday, the White House announced that President Bush and al-Maliki had agreed to set a "general time horizon" for bringing more U.S. troops home from the war.

"Barack Obama advocates an unconditional withdrawal that ignores the facts on the ground and the advice of our top military commanders," McCain foreign policy adviser Randy Scheunemann said Saturday. "John McCain believes withdrawal must be based on conditions on the ground.

"Prime Minister Maliki has repeatedly affirmed the same view, and did so again today. Timing is not as important as whether we leave with victory and honor, which is of no apparent concern to Barack Obama," Scheunemann said in a statement.

Just days ago McCain told reporters on his campaign bus that al-Maliki "has exceeded a lot of the expectations."

"I think that much to the surprise of some Maliki has proved to be a more effective leader," McCain said Tuesday in New Mexico.

"This presents an important opportunity to transition to Iraqi responsibility, while restoring our military and increasing our commitment to finish the fight in Afghanistan," Rice said in a statement Saturday.

"It's important for the McCain campaign that Maliki is not seen as endorsing Obama's specific plan," said CBSNews.com senior political editor Vaughn Ververs. "The attempt to clarify Maliki's comments by the Iraqi government helps, but the confusion created is probably beneficial to Obama as he continues his tour of the region."

Obama arrived on his first visit to Afghanistan on Saturday, less than four months before the general election. He also is expected to stop later in Iraq.

McCain has criticized Obama for his lack of experience in the region. The Arizona senator has suggested he would pursue an Iraq strategy "that's working" - a reference to the troop buildup credited for sharply reducing violence in the country.

Al-Maliki is scheduled to visit Germany next week for talks with Chancellor Angela Merkel and business leaders amid a renewed German push in helping to rebuild Iraq. Berlin had opposed the 2003 U.S.-led invasion of Iraq.