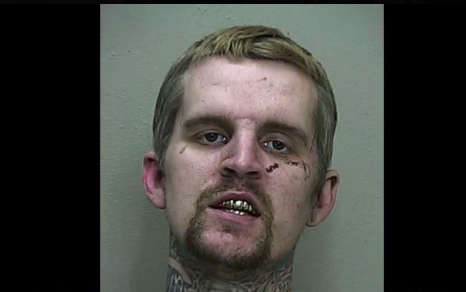 MARION COUNTY, Fla. -- Deputies rescued a convicted felon from a burning van after a pursuit ended with a crash, the Marion County Sheriff’s Office says.

Deputies received a tip on Sunday morning that a suspect only known as “Gold Teeth” was in a white van on his way to commit a home invasion robbery, the sheriff’s office said in a Facebook post about the incident. Deputies searched the area and found the vehicle and driver, who was later identified as 28-year-old Scott Michael Beekman.

Authorities said deputies attempted a traffic stop but that Beekman kept going, “driving recklessly and endangering other motorists” as he fled in the vehicle.

He “took multiple evasive measures” and led authorities on a pursuit before his vehicle sharply swerved off the road, hit a stop sign and a tree, then toppled.

The sheriff’s office posted video that shows the pursuit ending with the van running off the road. After a cloud of dust clears, flames can be seen rising from the site of the vehicle.

Authorities said the van caught fire and that Beekman was trapped inside.

“Once deputies were able to break the front window of the van, Beekman was pulled out of the vehicle and taken into custody,” the sheriff’s office posted.

The video of the incident shows the rescue.

Authorities say Beekman had non-life-threatening injuries and was taken to a hospital before being booked at the Marion County Jail.

Three loaded firearms -- a short-barreled shotgun, a .32 caliber pistol and a sawed-off .22 caliber rifle -- were found near the driver’s seat in a search of the vehicle.

Beekman was charged with fleeing with disregard to safety; possession of a weapon or ammo by a convicted felon; possession of a short-barreled gun, machine gun or rifle; as well as driving with a revoked or suspended license, according to authorities.

The sheriff’s office said Beekman’s license was suspended and that he is a convicted felon.