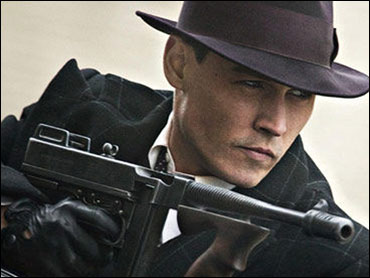 Actor Johnny Depp highly recommends his latest movie - though he said he hadn't personally gone out to see it yet.

Depp, in Tokyo for the Japan premiere of "Public Enemies," said Wednesday he was drawn to the movie because of his childhood interest in John Dillinger, the bank robber who in Depression-era America was declared public enemy No. 1 by federal authorities.

"I haven't seen the film yet, but I hear great things about it," Depp said at a news conference at a Tokyo hotel. The movie came out in the U.S. on July 1, but Depp often makes it his practice not to watch his movies, saying he enjoys the filmmaking process but doesn't like to see himself on screen.

Depp said he saw Dillinger, who was eventually killed by police, as a brave and charismatic figure, and listed the famed criminal among his childhood idols, along with Buster Keaton and Charlie Chaplin.

He said he felt a special connection to Dillinger because his own grandfather was pushed into illegal activities - "moonshining," or brewing illegal liquor - to make a living in Kentucky during the Depression.

Unlike Dillinger, however, the 46-year-old Depp, who was named this year's "Sexiest Man Alive" by People magazine, said he did not believe he had any enemies.

"I don't think I have any enemies, really," Depp said. "The scariest enemy is within, allowing yourself to conform to what is expected of you."

Depp will have an opportunity to watch the movie Thursday, should he choose to do so. He is attending a red carpet event before its Tokyo showing, and will address fans at the theater.