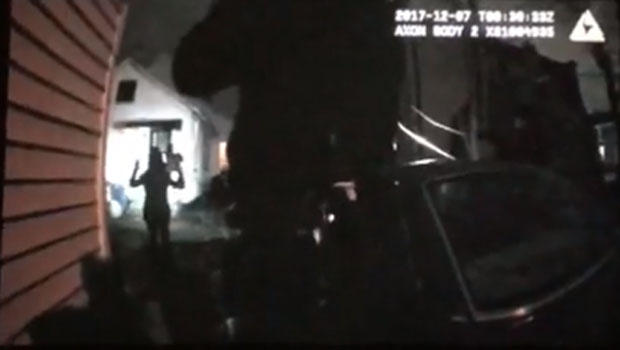 GRAND RAPIDS, Mich. -- A western Michigan police department said it won't discipline officers for detaining an 11-year-old girl, her mother and an aunt at gunpoint outside of their home while searching for another aunt suspected in a stabbing.

The Grand Rapids Police Department said in a news release Wednesday that an internal investigation of the Dec. 6 incident found the officers didn't violate department policy.

Bodycam footage shows police pointing a gun and handcuffing Honestie Hodges, who is black, as the girl cries.

The girl's mother, Whitney Hodges, told WOOD-TV officers ordered her daughter to come down from the porch with her hands up. On body camera video, an officer can be seen telling the child to walk backwards toward him as he holds up a gun.

The officer is then seen handcuffing the child, who begins screaming "No!" and wailing.

Another officer can be heard saying, "Quit crying."

The girl told WOOD-TV the incident left her scared.

"It made me feel scared and it made me feel like I did something wrong," the girl told the television station. "I'm afraid to open or go near my back door because of what happened."

Police said Carrie Manning, the aunt suspected of stabbing another relative, didn't end up being at the home. Manning, 40, was later found at another home and arrested on charges of assault with intent to murder and resisting and obstructing arrest.

Police said the officers detained the women and girl, who weren't armed, because they hadn't determined if they were suspects.

"What that doesn't mean is that we don't recognize that there is a need for us to look at what occurred and identify opportunities here to ensure different outcomes in the future," he said.

He said officers will receive new training and better supervision as part of a multi-step plan that will include an "Honestie policy" for how officers should interact with children.

"Concrete steps are being taken to ensure equitable outcomes in our interactions with the community," Rahinsky said.

Some area pastors were upset that the officers were cleared, saying such investigations should be handled externally.

"We are dismayed that there would even be the possibility of no disciplinary action on behalf of an officer, especially since the process of investigation and discipline is totally controlled by the Grand Rapids Police Department," said the Rev. Jerry Bishop, of LifeQuest Ministries.

Cle Jackson, an NAACP official, said Tuesday that the group wants to sit down with unions representing Grand Rapids officers to demand that police "know better" and "do better."